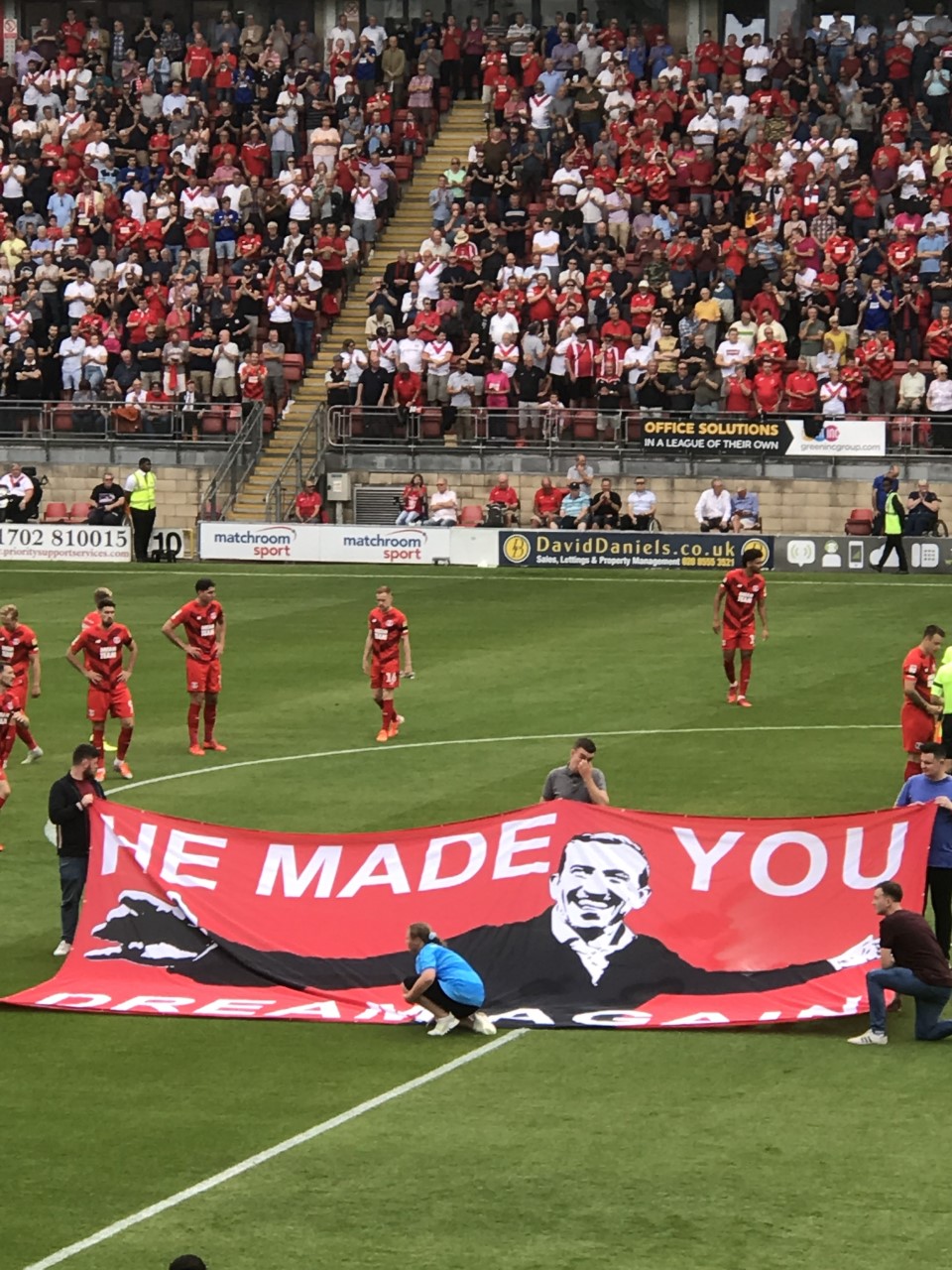 It was always going to be bittersweet: the excitement of our first game back in the Football League was inevitably going to be tempered by the emotion and grief we are all continuing to deal with after Justin’s passing. As hard as we tried to focus on the football itself we knew it was going to be a sad day.

As Mrs Football Nerd was visiting her mum in the morning, we unusually made our separate ways up to E10. For a moment of fleeting madness we nearly eschewed our traditional option of the Leyton Star as pre-match hostelry in favour of the Coach & Horses, but due to a hankering for their truly excellent chips in beer cheese sauce, the missus brought us to our senses.

This is in no way a slight on the Coach & Horses which, due to its proximity to the East Stand, offers the perfect venue to avoid cutting into valuable drinking time before early kick-offs and evening matches, as well as being ideal for the customary post-match debrief. However what football obsessive in their right mind would risk invoking the ire of footballing fate by willingly changing their matchday routine?

We actually headed into the ground earlier than usual as we didn’t want to miss the planned tributes to Justin and so were in our seats and ready when the Cheltenham Town fans emerged with their incredibly touching banner, alongside the O’s own one which had debuted at Harlow. Having experienced two moving tributes in pre-season perhaps helped us to get through the applause as the banners were paraded around the ground and through the incredibly emotional minute’s silence. In truth I don’t think there was a dry eye in the house as we all still struggle to come to terms with our loss. We will carry the sadness with us through the season and forever more.

In many ways we all: players, staff, ownership and fans probably needed to be able to have a truly competitive match to focus our energy and attention on. It was never a case of getting the memorials and tributes out of the way, just that it helps us if we can concentrate on what happens on the pitch and in doing our utmost to establish ourselves back in the League. The League that Justin led us back to.

Whether it was the occasion, the step up in quality or just a case of opening day rustiness, it was Cheltenham that seized the initiative in the early stages, Orient seemingly taking some time to settle and adjust. Gradually though the O’s fought their way into the game by matching up to the visitors’ physicality, Connor Wilkinson in particular starting to give as a good as he got against their robust centre backs.

We lost Brillo early on after a clash with journeyman forward Luke Varney who was subsequently booked for simulation, our keeper’s suspected concussion meaning that Sam Sergeant had to take his place. Despite worries to the contrary, Sergeant fared well and as the missus commented would probably benefit from the minutes on the pitch if/ when we need him again in the future.

Minutes before half-time Lee Angol worked some space for himself in the area and slotted home only to be denied by a raised flag, at the time I thought it was close, but now having seen the replays, it was marginal to say the least.

At the break the 6K plus crowd and the decision to only open one of the bars in the East Stand meant that the queue for refreshments was longer than the break allowed, while the missus persevered eventually getting her half-time pint five or so minutes after the game had restarted, I opted to get back to my seat not wanting to miss any of the action. If Orient are going to push on and grow as a club, some consideration and planning needs to be given to updating the facilities in this part of the ground.

Through the second half the O’s continued to knock at the door being denied both by good scrambling defending and some good fortune, until with just twenty minutes to go Josh Wright seized upon a loose ball in the area and poked it home. The relief around the ground was mixed with a realisation that there was something entirely appropriate about Justin’s friend and last signing for the club being the man to put us in the lead in this emotional return to competitive action.

As the game wound down Varney, who had been a thorn in our side ever since the incident with Brillo, was shown a second yellow for an elbow on Big Marv. He was soon followed by teammate Rohan Ince who had apparently thrown a water bottle towards the linesman.

Up against nine men Mrs Football Nerd in particular thought we should have capitalised and scored at least a couple more goals, but in the end we had to settle for the 1-0 win. In many ways though all that mattered was getting the first three points of the season on the board and giving ourselves something to build on.

It’s Macclesfield away next, a team that struggled upon its return to the Football League last season, a decent result there and the momentum will start to build ahead of the big away trips to Mansfield and our old friends Salford, towards the end of the month.

One thought on “Orient get off the mark on an emotional day.”