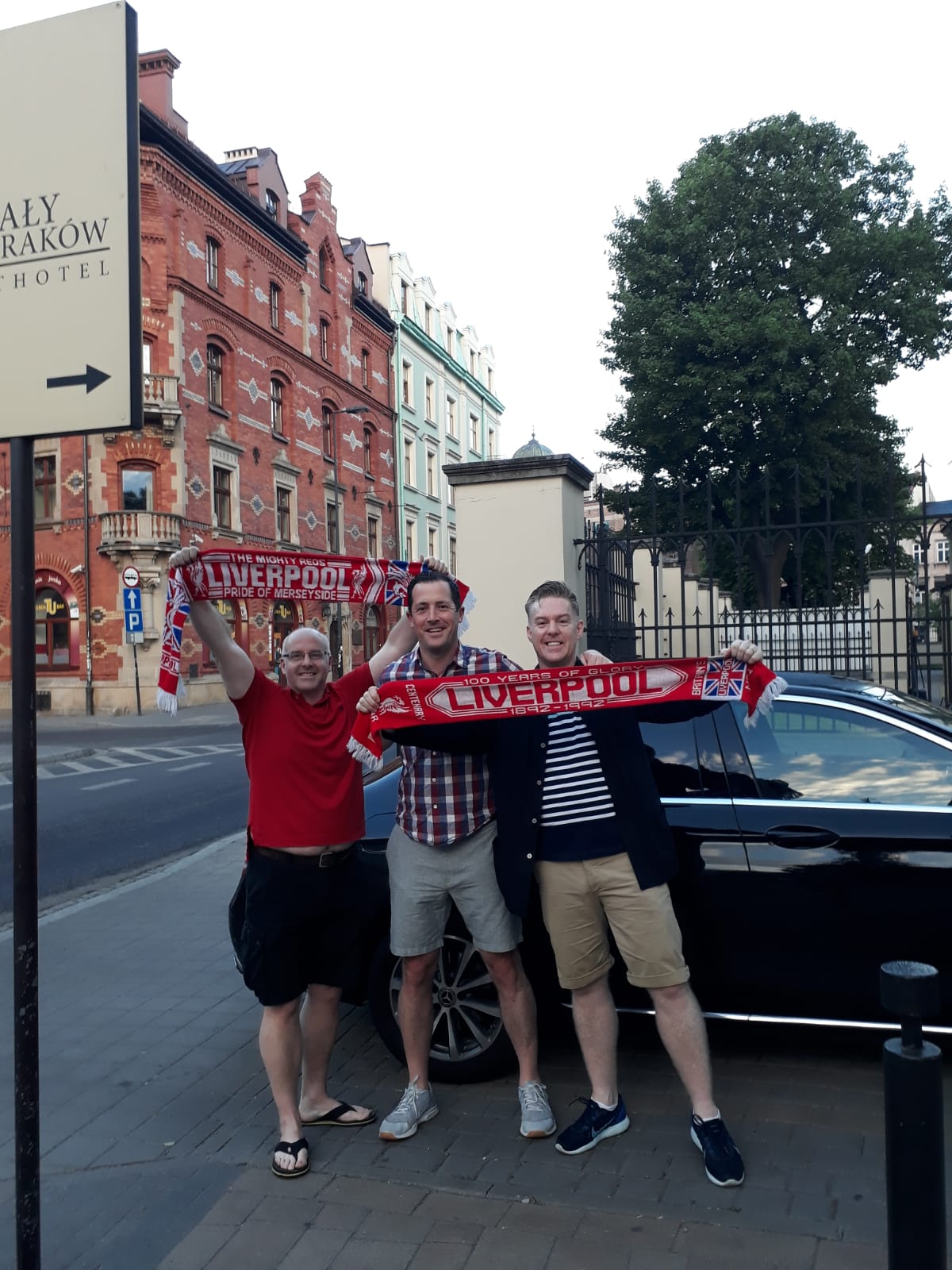 Having missed out on tickets for Liverpool’s last two appearances in the Champions League Final, Our Kid was absolutely thrilled that he managed to secure a ticket for this year’s Final in Kiev, although getting there and back was to prove far more challenging than he thought! Upon learning late on Thursday that his planned flight on Saturday morning had been cancelled, some emergency creative thinking saw him land in Katowice, take a late night cab across Poland to Krakow before undertaking a race against time in a car with a driver and a couple of mates to cover the 500 plus miles to Kiev in time for kick-off. Here are his reflections on his Eastern European adventure.

It’s 7am the morning after the night before, a few klicks from the Polish Border, an hour’s kip in a closed roadside petrol station seems to have revived Vitali, our driver; time and distance allow us some perspective on the Final. In the stadium before kick-off, I commented that one end of the stadium was emotion, the other institutional, one passionate, the other professional.

There seems to me to be two ways to view the match: one that for Liverpool to win we needed most things to go for us, they didn’t; and the other that we needed Madrid to be off their game, at least a little, they weren’t.

Losing Salah restricted our forward play enough to make breaking the midfield vice-like grip that Madrid held us in a challenge beyond our hardworking but creatively limited midfield. One goal gifted can be recovered, two, not at this level. We knew a seemingly improved Karius was merely paper over cracks.

High in the stand you got a wonderful view of Real’s quick, crisp, accurate passing that had to be admired. Time and again you wondered how a particular pass had gotten through, throw in a perfectly timed wonder goal from a £100m substitute and ‘Old Big Ears’ remains in Madrid for another year.

The elongated car journey has provided time to reflect on whether it has all been worth it? The answer is a resounding yes! Not just to have seen that goal. This is what we do as football fans, as religious pilgrims find their calling to journey to Lourdes, Mecca or Jerusalem, we are duty-bound to find a way.

Having missed out on ballot tickets in Istanbul, Athens and Basel, the assumption was that my Dad’s loyal attendance in seat 67, row 19 of the Kop would again not deliver an invite to join the red hordes in the stadium.  So when I did receive an email confirming my success I had a decision to make. Encouraged by my wife who pointed out that this was truly the chance of a lifetime, the decision was made, flight secured after a nervy wait; and as a less frequent attendee at Anfield these days, songs brushed up on with the help of Youtube.

As excitement built, in the days leading up to the match, the bombshell was dropped: the news at 4pm on the Thursday before the final that the flight had been cancelled! With just enough time to drive, an option I fleetingly considered, being emotionally committed, I was compelled to find a way.  The alternate journey was secured: Friday night to Katowice, midnight cab to Krakow, 2 hours in a hotel then joining my school friend for what Google Maps assured us was an 8.5 hour drive. Unfortunately Google hadn’t figured on the 3 hour border crossing though, a window to post-Brexit life for us Brits.

A long, but fun drive: meeting my old school bus bringing Reds from Liverpool who looked battle weary, and a Mexican Madridista who was driving from Prague after flying via Paris.  The trip took an even more surreal turn when with an hour to go, our driver requested a ten minute pit stop to say hello to his family that lived nearby, handshakes and photos completed it was time to hit Kiev.

There was a tremendous atmosphere, with locals coming out to mingle with the Red Army.  I met up with a group I used to see regularly when the biweekly trip to Anfield was core to my diary, back in the days before family commitments resigned me more to the armchair. There is no doubt the selection of Kiev was a romantic but ill-thought-out choice by UEFA, with one airport and few hotels it would never accommodate whoever was in the final, exacerbated when it turned out to be Liverpool. That said a city that saw it as a privilege to host such a game provided an excited and warm welcome, and a fitting backdrop to Liverpool’s latest European excursion.

The walk to the stadium was magical; a buoyant friendly mood combining intrigued hospitable locals and friendly Madridistas. Once through the gate I had that feeling you have as a kid when you attend your first cup final, this is the most important club match in world football and I am here, better still I am here with my club, the club that is made for these nights.

Then a stark reality, a glimpse of the pitch reminds you that you are here for a match, one against one of the best teams European football has known. Whilst our spirited, developing and sometimes magical squad fell short this time, maybe we can maintain the development curve we are on and steel ourselves for another shot in the not too distant future when we can retain the emotion but add a little more professionalism and canny knowhow.

The great thing about dreams is there is no limit to how many times you can live the same dream. Thanks Kiev it’s been emotional, now I am looking forward to a shower and maybe a couple of hours’ sleep!

2 thoughts on “All the way to Kiev! A guest piece by Our Kid.”