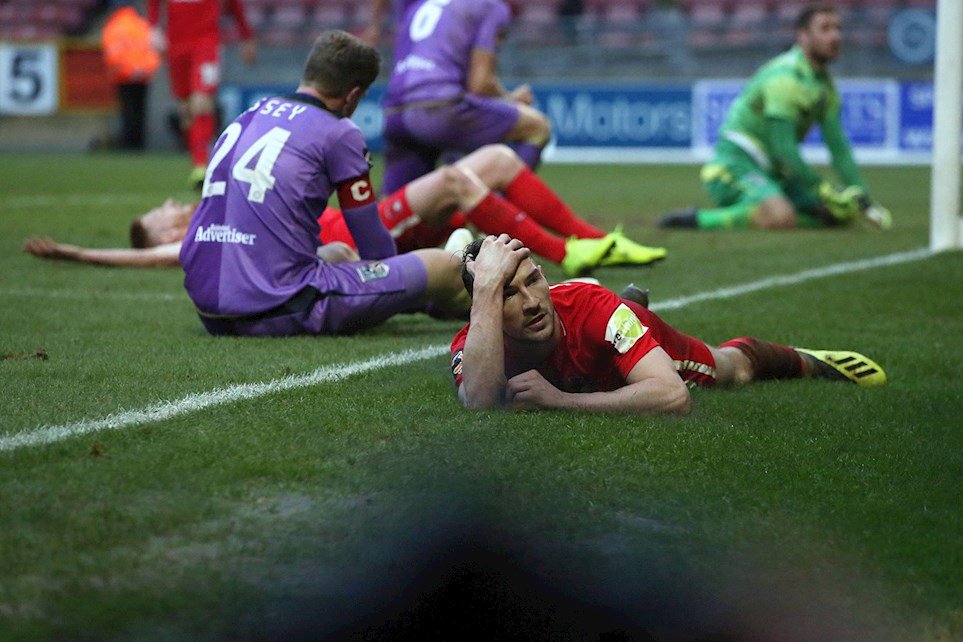 That wasn’t supposed to be how it went! We did our bit: wore my now ‘lucky’ white and red Sambas? Check! Had a couple of pints and chips with beer cheese sauce in the Star? Check! Walked through Coronation Gardens with the missus rubbing the ball on the Laurie Cunningham statue for good luck? Check! So why the hell didn’t the O’s win a game against a team hovering just above the relegation zone? For god’s sake they were even wearing a two-tone purple kit, which is a crime against football fashion if ever there was one!

Solihull Moors’ win away at Aldershot the previous Tuesday had knocked Orient off the top spot in the league and seen the West Midlanders open up a two point gap. Even with a game in hand the O’s couldn’t afford to drop too many points between now and the final game of the season. Maidenhead United at home should have been an opportunity to get the three vital points in the bag and spark another run of form towards securing the cherished solo automatic promotion spot. Instead what it did was to add to the nerves of the Brisbane Road faithful.

The build up to the match brought the news that former loanee and still popular amongst the support from his previous spell, Jay Simpson had been re-signed after training with the club upon returning from a stint in the MLS, which suggested an attempt to rekindle the attacking potency that seems to have gone missing in recent weeks.

Orient started like a team that meant business, getting on the front foot and taking the game to Maidenhead. Charlie Lee who seems to win more attacking headers than someone of his size should, heading wide after getting on the end of a second corner from Jobi McAnuff in quick succession. Only a matter of minutes later, Ling fired a volley just wide after connecting with Widdowson’s cross.

Quite what happened after that initial blitz is a mystery, but the level dropped, possession was conceded needlessly time and time again, and Orient seemed to lose their impetus. The impact of starting both Simpson and Bonne together seemed to mean that the latter was handed the task of being the aerial ball winner/ target man, a role that for me doesn’t necessarily play to his strengths and was made even more challenging in this instance by the presence of man-mountain, Ayo Obileye, as his constant defensive minder.

Eight minutes into the second half, Maidenhead took the lead through the seemingly miles offside Adrian Clifton who tucked the ball easily past Brill and into the Orient net, sparking dog’s abuse from the East Stand cognoscenti, yours truly most definitely included, towards the merry flag-waver in front of us.

A response was needed from the home side and promotion hopefuls but it wasn’t forthcoming, instead Orient continued to look ponderous on the ball and blunt in attack.

Matt Harrold, on as a sub, somehow managed to clear the bar from close range after a cutback from Craig Clay, one of the only O’s players to impress even slightly along with Turley and man of the match Happe. The fact that two of those three are centre backs reveals quite a lot about Orient’s performance on the day! Maidenhead should have made it two late on only for Owusu’s chip over Brill to clip the post, sparing the Orient keeper’s blushes.

It was a disappointing end to what could and should have been the chance to lay down a marker to Orient’s credentials for a return to the Football League. Either frustratingly or thankfully depending on your perspective, both Fylde and Salford lost their matches, which while limiting the damage in terms of the table also showed what a wasted opportunity it was to put some distance between us and two of our closest promotion rivals.

In the matchday programme, vice chairman Kent Teague suggested that at the start of the season the target was to be in the playoff places here at the business end of the season; but that such had been the progress from the start that Justin Edinburgh’s charges had staked a very real claim for top spot and the title.

Having dropped to third in the table after Saturday’s defeat, last night’s wins for AFC Fylde and Wrexham saw the gap widen to four points off top spot for Justin Edinburgh and his men, albeit with a game in hand.

With the O’s in FA Trophy action at Brackley on Saturday the gap could widen further if Wrexham get anything from their trip to Gateshead. Strictly speaking Orient’s fate is just about in their own hands if they win their game in hand and beat Wrexham in a couple of weeks’ time then they will regain the lead.

However before then there are tricky looking trips to Havant & Waterlooville and all the way to Barrow on a Tuesday night to negotiate. If they are to have any continued hope of avoiding the lottery of the playoffs the O’s will need to right the ship by re-finding their early season form, and quickly.