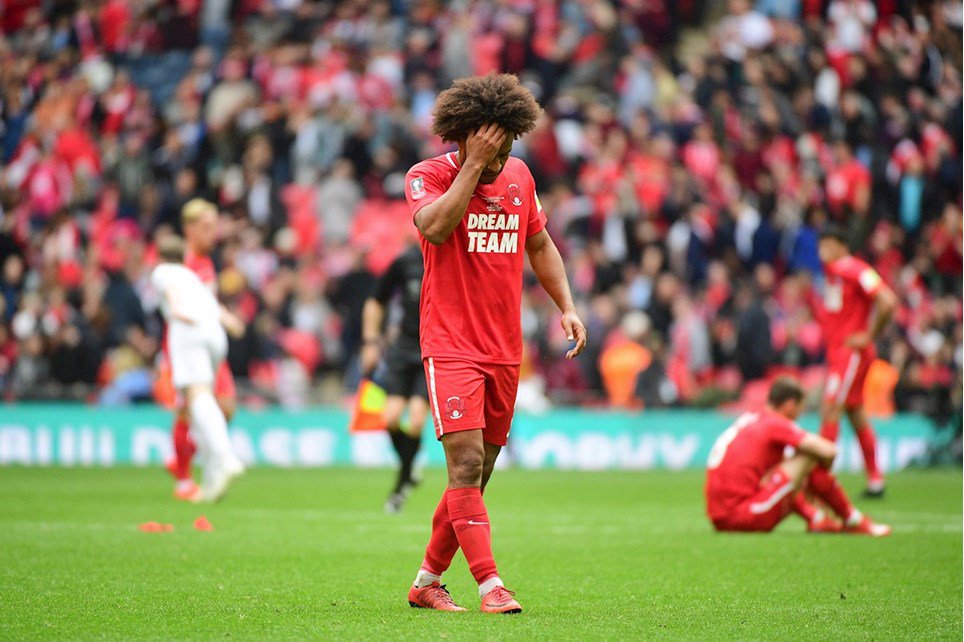 In the end it wasn’t quite meant to be for Orient, whilst they will escape non-League as Champions they couldn’t make it a double by securing the FA Trophy in what will hopefully be their final appearance in the competition.

The National League campaign is long, wearing and a severe test of a squad’s fortitude and mental strength. As I write these thoughts post-Wembley, I can’t help but feel that the team was jaded after such a long and ultimately incredibly successful season. There was also probably an element of ‘after the lord mayor’s show’ about the whole cup final experience.

After working so hard to secure the title and return to the Football League and the celebrations that followed it was always going to be tough for players and fans alike to get themselves up for a match of secondary importance, even if it was a cup final. As Mrs Football Nerd and I soaked up the atmosphere on Wembley Way (read polishing off a few cans from the rather handily placed supermarket!), the atmosphere felt strangely subdued, flat even; although the Josh Coulson masks with a comically enlarged forehead that everyone seemed to have acquired did create a very surreal feeling all around us.

Having lost in the play-off final the previous weekend and being consigned to non-league for another season AFC Fylde knew that this was their chance to salvage something from a season in which they have impressed, if ultimately not rivalled the very top teams.

Orient huffed and puffed for the first half and only really sparked into life when Jordan Maguire-Drew replaced Jamie Turley at the break prompting a rejigging of the line-up. Frustratingly the O’s were to hit the post three times in the second half and did everything but get the ball into the back of the net. In the end it was a free kick from Danny Rowe on the hour mark that sealed victory for Fylde.

On the way back down Wembley Way we decided that the only way to deal with the slight tinge of disappointment we were feeling was to head into the Box Park, the allocated venue for Orient fans; after all we still had title celebrations to carry on! It seemed we were not alone in our thinking as the place quickly filled up with O’s supporters. All it took was a quick request from the missus to the DJ for ‘We are the Champions’ and missing out on the FA Trophy and the double were completely forgotten about as everyone in the place was transported back to Brisbane Road three weeks ago and we all made sure we carried on our title winning promotion party.

Even just a mere few days into the off-season, the club seem to be making plans for next season as we have already had the news that four players are not to be retained going forward in: Charlie Lee, Charlie Grainger, Alex Lawless and Jay Simpson.

This has been coupled with the news, at the time of writing that: Craig Clay, captain Jobi McAnuff, Matt Harrold and, much to the relief of Mrs Football Nerd, her favourite Joe Widdowson have all signed new deals. While the club are also looking to retain the services of Jamie Turley and James Dayton in addition to those already under contract. This is positive news and shows the progression and development within a squad that was, by necessity, hastily assembled in the lead-up to the start of the 2017/18 season.

Recent history in the form of Lincoln City, Forest Green Rovers and Tranmere Rovers suggests that if the core of the squad that gains promotion from the National League can not only be retained but also augmented by a sprinkling of enhanced quality then a top-half finish and maybe even the play-offs might be a realistic target.

Although the struggles of last year’s champions Macclesfield Town may sound something of a warning knell, after a season in which players have been left waiting to be paid on serval occasions, the Silkmen somehow miraculously escaped an ignominious return to non-league on the final day of the season.

It seems very much as if Orient are endeavouring to get their business done early, at least in terms of deciding who they want to stay and who they are happy to release; however there are some worrying transfer rumours emerging around the core of our most coveted players. If the gossip mill is to be believed Leicester City and Sheffield United are both ‘interested’ in top scorer Macauley Bonne who was also reportedly attracting the attentions of Leeds United at the run of the year.

Equally, it doesn’t take too much of a stretch of the imagination to appreciate that young talents such as Josh Koroma, Marvin Ekpiteta and Dan Happe might attract interest from the higher echelons of the league. Hanging onto key players as much as adding anyone new may be the key business for Messrs Travis, Teague, Ling and Edinburgh over the summer, everything they have done since coming in suggests that they will get it right and we can hopefully look forward to making a mark in League Two next year.