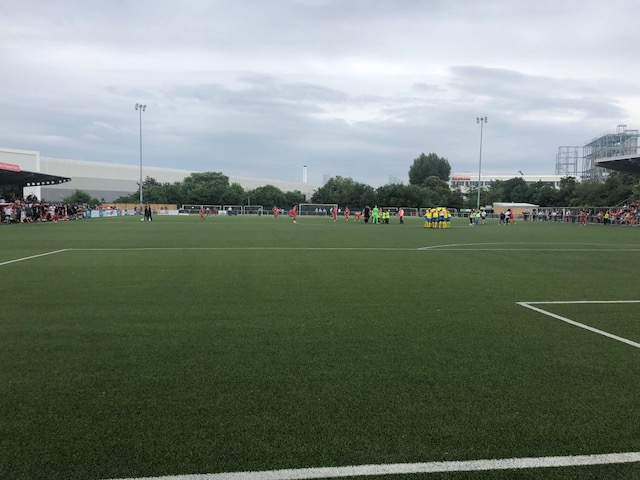 With Orient not having been in action since Wembley, some seven weeks previously, and Mrs Football Nerd and me starting to feel the full effects of football-watching withdrawal, there was no way in this world that we could resist a trek into deepest darkest Essex for the O’s first pre-season engagement of the summer. The fact that, like all of us, we are still coming to terms with our sadness over the loss of Justin made it feel even more like the right thing to do, and so it was off to Harlow we went.

Not even sure what league Harlow Town compete in (it is apparently the South Central Division of the Isthmian League, also known as the Bostik League (thanks Google!), and is the eighth tier of the English football pyramid); we had no idea what to expect from a visit to a club that we knew absolutely nothing about. However being the intrepid football adventurers that we are, that wasn’t going to put us off in any shape or form.

Handily placed just forty minutes by train from Liverpool Street this match offered the perfect opportunity to get back into our Orient routine in a more laid-back, less nerve-inducing manner than had been the case at the climax of last season.

A journey that was, bizarrely, re-routed via Stratford and slightly delayed due to engineering works, offered us just enough time to load up on the traditional awayday fayre of a buttie (as those of us with Northern origins insist on continuing to refer to the Earl of Sandwich’s handy contribution to gastronomy!) and a couple of cans of M&S’s finest Belgian Lager, before we pulled into the ‘picturesque’ former New Town of Harlow.

Ever prepared, we had of course researched local pubs and made our way with the aid of Google Maps for the tech savvy amongst us, (read: Mrs Football Nerd), and directions scribbled on a piece of paper for Luddites like yours truly, we rocked up at an ideal watering hole in the form of the Shark public house, positioned handily pretty much halfway along the half-hour walk to the ground. Its location on the edge of a small wood and country pub style exterior added a slightly surreal feeling to the whole experience.

As we walked in we were amazed to discover that we weren’t alone in our quest as there was a clutch of three other Orient fans comfortably installed in the Lounge bar. A quick pint and off we set to the grandly-titled Harlow Arena.

Upon approaching the ground we were pleasantly surprised to find it was a much better set up than we had feared anticipated and featured a stand, a covered terrace and most importantly a bar complete with adjoining marquee that was clearly being readied for a wedding later that day, hopefully for the happy couple at a time suitably after the final whistle to ensure that the hundreds who had travelled from East London had vacated the premises!

As the teams emerged and took up their positions for a minute’s applause for Justin, a wave of sadness swept over us all, a realisation that emotions are still raw and we are all still enduring our period of grief. To an extent having an actual football match to concentrate our thoughts on helped. Our hosts Harlow Town were utterly brilliant in the way they handled the emotion we were all feeling, their club is an absolute credit.

In his first game in charge Ross Embleton opted to start with a mix of the established starting line-up and some squad players and youngsters; in place of the departed Macauley Bonne and Josh Koroma we started with a towering front two of Matt Harrold and Connor Wilkinson.

From the outset it became clear that Orient were going to control the match, hardly allowing Harlow a sniff of possession, it seemed only a matter of time before we scored. Jordan Maguire-Drew once again impressed in the No.10 role with very encouraging signs that he may have a big say in our attacking fortunes this season. In the end it took all of twenty minutes before Harrold, scorer of such key goals in last season’s run-in, got us off the mark closely followed by Wilkinson’s first goal for Orient.

2-0 heading into the break we decided that we would head back into the bar/ wedding reception venue and then sample the rather excellent barbeque sausages that were attracting a roaring trade. With the ground readily accessible all the way round we decided for the second half we would try a new vantage point on the terrace behind the dugouts.

As soon as we took up our new position we recognised a familiar face, Dave, whom we had met on previous travels to Maidenhead and Maidstone. It seemed that the opportunity to get back into the swing of regular Orient-watching, even in a relatively low key friendly was too much too resist for him as well as us.

A completely changed XI took the field for the second half which again was a wise mix of regular starters, youngsters and squad players. New striker and presumed Macauley Bonne replacement Lee Angol looked lively and will be relieved to have gotten off the goalscoring mark with our fourth from a free kick 30 yards out after Brophy had made it three.

As we wound towards full-time a familiar refrain from the end of last season was heard: ‘If Alabi scores we’re on the pitch…’, in recognition that our much-maligned, transfer-listed signing from last summer was the only one of our strikers who hadn’t found the net despite having hit the post and then the crossbar. With just ten minutes to go he slotted home and while out of respect for our hosts we didn’t go on the pitch, there was a feeling that maybe it might be worth persevering with him for another season.

As Mrs Football Nerd and I headed back to the station, of course pausing for a brief pit stop back in the Shark(!), we reflected on an emotional day, and while this season is inevitably going to be cloaked in sadness, it was great to have our Orient back. Bring on the new season!

One thought on “An emotional but reassuring day at Harlow.”