Even in the modern football world where satellite television coverage, the Internet and the growth of the major European competitions have diluted some of our beloved game’s exoticism and mystery; it is still possible to engage in football experiences that remind us all while we fell so hopelessly in love with the game in the first place.

When Mrs Football Nerd and I looked into using our latest ‘hard-earned’ (read: gained through ongoing holidaying and football adventures!) British Airways Companion Voucher to celebrate the missus’ birthday, we settled on a trip to Argentina, a country we had both wanted to visit for some time. While the selection wasn’t purely motivated by football watching reasons (honest!) the chance to visit the city of Buenos Aires which along with its surrounding areas boasts a total of fourteen (yes you read that correctly!) Primera División (aka Superliga Argentina) clubs was too much for any self-respecting football obsessive to resist.

The only slight issue we faced was that, in true laid-back Argentinian fashion, the fixtures were only to be released a couple of weeks before the start of the season at the end of July, with the actual dates and timings of games confirmed just a week or two before they were actually to be played. However being the resourceful types that we are, we opted to make sure we were in the city across two weekends.

While the ‘Cinco Grandes’ (literally the ‘Big Five’) have been established since the 1930’s, with no disrespect intended to Independiente, Racing or San Lorenzo, anyone looking for a baptism in Argentinian football would unquestionably want to visit either the world-renowned Boca Juniors or their bitter, and actually more successful rivals, River Plate. For an all too fleeting moment when the fixtures were announced we almost had the opportunity to go to both, but alas the River game on our second weekend would be confirmed for the day of our departure.

Given the choice though for yours truly at least, the better half having somewhat arbitrarily declared her allegiance to ‘Los Millonarios’, the chance to watch the reputed most popular team in South America, the club of a certain Diego Armando Maradona, and to witness their legendary/ insane ‘La Doce’ (12th man) ultras at the iconic La Bombonera is simply a dream come true for any bona fide football obsessive. Besides, having opted for Hotel Boca (yes that is exactly what you think it is…their own hotel!) we couldn’t really go anywhere else could we?

Due to their immense popularity as well as a result of the ongoing issues with Argentinian football that have seen away fans banned from all top level games since 2013, securing tickets is not exactly a straightforward endeavour. Boca restricts tickets to members only with an estimated seven year waiting list to become a member, and doesn’t necessarily encourage the resale of tickets by members not planning on attending as happens in Europe.

Thankfully cometh the need cometh the perfect solution, the absolutely brilliant Landing Pad Buenos Aires (https://landingpadba.com/) offer tickets and organised group excursions to a number of football venues Boca and River obviously included, so if you want to experience Argentinian football start by contacting them. A brief and efficient exchange of emails and we were booked in for the visit of Aldosivi (no we had never heard of them either!) on matchday three.

Flying overnight from London having used the limited benefits of the British Airways loyalty scheme to secure a business class bed each, we arrived in Buenos Aires feeling more refreshed than we should have done and after leaving our bags at the hotel it was time to head out to explore the city. First up was the stunning Plaza Mayo (for the true Argentine affect any ‘y’ sound is pronounced ‘j’ so it sounds like the Plaza Majo), with the Casa Rosada (Pink Palace) at the far end: famous for being pink and having the balcony where Madonna Eva Perón did her thing.

Just behind that is the redeveloped Puerto Madero, a riverside complex with disused warehouses converted into apartments, bars and eateries that wouldn’t have been out of place in the States or Western Europe. After a hearty (read: gut-busting but delicious lunch) we headed back to check in.

Hotel Boca leaves you with no uncertainty as to the inspiration behind its design with blue and yellow everywhere and pictures of the players, fans and La Bombonera at every turn. Each door is decorated with the portrait of a legendary player from the club’s history and having opted to splash out on a luxury room we were pleased, if not surprised, to discover we were in one of the Diego Maradona suites. 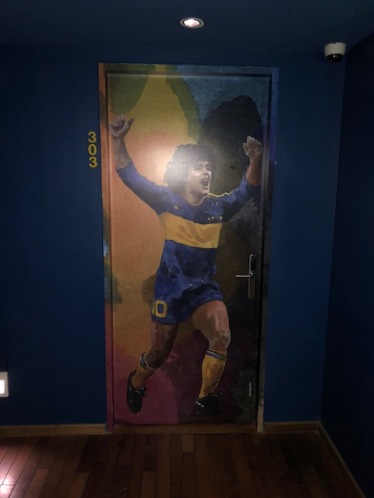 Normally on these adventures one of Mrs Football Nerd’s ‘favourite’ pastimes is to let me drag her round the city in search of an Irish Bar to watch Arsenal, but with the Gunners’ game against Burnley scheduled for 8:30am local time even I had ruled out that as an option: only because there wouldn’t have been anywhere open I hasten to add! To our amazement such is Argentina’s obsession with football that we had three or four dedicated sports channels showing a whole range of games from a variety of leagues around the world, the Premier League very much included, so we could watch the match without even leaving our room!

Thankfully Arsenal did the job to avert any potential sulking, the whole experience elevated by the Argentine commentary team whom seemed most impressed with on loan Spanish player Dani Ceba-j-os and who greeted all three goals with a hearty ‘Gooooooooooooooooooooooooooooooooooooool!’ as we all remember from Mexico 86.

We spent the rest of Saturday and the early part of Sunday exploring this most beautiful, friendly and amazing city, before in the later part of Sunday afternoon it was time to rendezvous with the guys from Landing Pad for the match. The chosen spot being one of Buenos Aires’ most famous pizzerias El Cuartito. To our amazement our group was sizeable and made up largely of Americans visiting the city and taking in a match experience, significantly outnumbering the European/ British football tourists we had anticipated. Still it was a very friendly group.

Our allocated guides: Santiago (aka James as apparently no one can pronounce Santiago), Andy and Gaston made sure the pizza and beer kept coming and taught us some of the key things we would need to know for the match: to limply wave your hand in the manner anyone who has ever encountered an Argentinian football fan will instantly recognise while chanting for Boca, the aforementioned “Gooooooooooooooooooooooooooooooooooooool!” celebration and that if a Boca player went over with even the merest hint of contact to shout “Eeeeehhhhhhh!” while pointing in an aggressive manner, but if one of the opposition went down even after serious physical assault by one of our boys we were to open our arms and say exactly the same but with a tone more akin to Fonzy from Happy Days, for those of us of a certain vintage.

On the bus on the way there Gaston talked us through the process for gaining entry to the stadium using our ‘borrowed’ membership cards, how to negotiate the ID checks to ensure none of us were known Argentinian football hooligans, thankfully none of us were, and what we might want to leave behind on the bus so it wasn’t confiscated as something that could be thrown on the pitch or indeed sold later by the security guards. Thanks to his expert briefing getting into the ground was no more hassle than for any game we have been to.

Due to Mrs Football Nerd’s very real fear of heights and the terrifying experience at ‘the mini-Bombonera’ ie: the Estadio Ramón Sánchez Pizjuán in Seville back in December (https://football-nerd.org/2018/12/21/football-nerd-weekly-ramblings-futbol-sevilla-style-a-visit-to-estadio-ramon-sanchez-pizjuan/), we had opted for seats in the lower tier and were pleased to find that we were bang on the halfway line right where the Boca players emerged, although the security screen topped with spikes did inhibit the view a tad in these alleged ‘VIP seats’, Club Level at the Emirates this was not.

The ground itself is unique encompassing a steep multi-tiered bowl round three sides with a terrace to house ‘La Doce’ behind one goal on the second tier, something I am not sure I have ever seen before. It would be interesting to see what our domestic safety experts would make of the standing on crush barriers, climbing fencing, jumping up and down incessantly and balancing precariously on walls that seems part of the modus operandi of these insanely, quasi-religiously, passionate fans! The one side of the ground not part of this bowl is a block of executive boxes all fronted with banners of different Boca ‘peñas’ (supporters’ clubs) from all over the country/ world.

Before the kick-off we were treated to a traditional style marching band which added a strange, almost surreal, sense of pomp and ceremony to proceedings. Then out came the teams: Boca emerging seemingly from underneath the pitch right in front of us, while the visitors joined them from a separate tunnel in the corner away to our left. The explosion of noise, confetti and the singing of Boca’s anthems in unison was almost cult-like in its unquestioned dedication.

The match itself was far from a classic, a scrappy affair without too much in the way of fluid play. Boca’s two standout players being former AS Roma stalwart Daniele De Rossi and veteran and club legend Carlos ‘Carlitos’ Tevez, both of whom are the wrong side of thirty-five, probably tells you all you need to know about the standard. Rather disconcertingly the large advertising screens on the far side of the ground kept flashing the trailer for the Netflix movie ‘Apache: La Vida de Carlos Tevez’ at random intervals. It can’t have happened before that a biopic has ever been advertised for a player actually on the pitch!

The result was settled by a tap-in from that man Carlitos just past the half-hour mark which somehow saw him needing his head bandaging after the celebrations, and a higher quality strike from Salvio, just on as a substitute, driving through the middle and curling an effort inside the left hand post twelve minutes from time.

As we headed back to the agreed meeting point at “Buenos Aires’ sh**t*st ice cream purveyor” at least according to Gaston; we reflected on an absolutely fantastic experience if not the greatest match we have ever seen. We both know we will be back to watch Argentinian football in the not-too-distant future, just don’t tell anyone at La Bombonera or Hotel Boca that it is very likely to be at El Monumental to see the more impressive looking, at least from what we saw in a couple of their matches on TV, River Plate!

One thought on “Football Nerd on Tour – La Bombonera – a visit to another of the cathedrals of the Beautiful Game.”