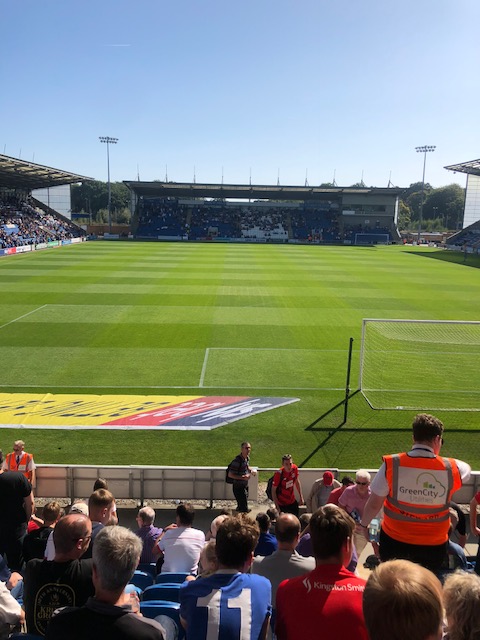 Originally this post was going to be all about Mrs Football Nerd’s and my trip to Colchester on our first bona fide away day of the season, but as a result of our Interim Head Coach’s understandable decision to stand down, it feels completely right to also give some thoughts to the position in which Ross felt that he found himself in.

There is something particularly exciting, magical even, about following your side away from home: the unfamiliarity of the matchday routine, shaking off the slightly dusty feeling from the excesses of Friday night, stocking up on provisions on your way to the station (read: beer, crisps and in the case of the highly sophisticated missus a lobster roll from M&S!), as well as being given licence to have a lager or three before you would normally have even left your house, are all part of the customary awayday package.

On a particularly, almost unseasonably, sunny day we headed for Stratford, which felt slightly surreal given this is our usual route to Brisbane Road, to catch our pre-planned and pre-booked train into the darkest wilds of Essex. A relatively brief hop of under an hour and we found ourselves in Colchester. Being the adventurous souls that we are, we eschewed the option of the Park & Ride bus at £3 a pop having done our research and safe in the knowledge that while the ground was a comfortable 25 minute walk away there was a pub halfway there.

As it transpired the first half of the walk in the scorching relatively warm sunshine was largely uphill, so as the excellently placed Dog & Pheasant came into view just over the horizon it felt like one of those mirages that used to feature in the old black & white movies of people stranded in the desert. Thankfully it turned out that it was actually made of bricks and mortar and despite the painfully slow service did actually provide us with the refreshment that we were in increasingly desperate need of. A brief chat with some of the local “Col-U” regulars as the apparently like to refer to themselves, revealed that they were expecting 1,600 of the travelling Orient faithful…maybe they should have alerted the bar staff as well!

After watching the end of the Spurs losing to Leicester in another Premier League game ruined as a spectacle by yet more over-officious use of VAR, off we set for the rather blandly named Jobserve Community Stadium. Set on the outskirts of town it felt very much like any of these identikit grounds that, while providing decent facilities for spectators, lack the soul and vibrancy of old school grounds set amongst rows of terraced houses that so characterise the roots of football in this country.

Despite struggling for form and seemingly finding it hard to adapt to the challenges of life at a higher level there was something of an upbeat atmosphere amongst travelling O’s, a feeling perhaps that we aren’t that far away from it clicking into place and us starting to find some form get results and to build some momentum. Alas that was to last for just three minutes until Poku’s deflected effort beat Brillo and we found ourselves up against it once again, in the words of Ray Charles “If it wasn’t for bad luck…we’d have no luck at all!”

We seemed to raise ourselves to an extent after that early set back, Louis Dennis playing something of a floating role at No.10 behind lone striker Conor Wilkinson, looking the most likely. However our play through midfield seemed laboured, almost pedestrian, and didn’t serve to open up the Colchester defensive ranks. Equally, little was sticking up front as Wilkinson struggled to impose himself against their centre backs.

Just before the half-hour mark things went from bad to worse when after a disputed throw-in award, our backline and midfield stood watching as Ryan Jackson worked space for himself on their right before fizzing an effort into the top corner. His effort left Brillo with no chance but begged the question of why no one had gone to close him down?

A minute before the break Wilkinson poked the ball home after a bit of a scramble in their area, giving us something to cling onto at the break. In the unusual move of treating football fans like grown-ups the stewards had opened up the doors so people could enjoy a half-time beer or have a cigarette in the sunshine which had us scratching our heads as to why more clubs, our own included, couldn’t operate with similar consideration.

The O’s were much improved in the second half helped by added urgency in the middle of the park after the introduction of last year’s player of the season Craig Clay just past the hour mark. However we couldn’t find the breakthrough that would have drawn us level. The late introductions of Matt Harrold to do what he does and what Wilkinson struggled to throughout, ie win aerial duels and hold the ball up; and James Alabi who for once looked fairly threatening gave us even more of a push towards goal. In the end though it wasn’t to be and we headed home rueing more sloppy goals knocking the wind out of our sails.

On the train on the way home we bumped into a familiar face, Dave, who we seem to encounter every time we go away to watch the O’s; we all agreed that the second half offered some encouragement but we would all welcome a win and the sooner the better. Here’s hoping it comes against Port Vale at home on Saturday!

Thank you for your courage and leadership Ross.

On Monday came the news that Ross was going to stand down as Interim Head Coach and return to his role as assistant, as in his own words he felt that after Justin’s tragic passing in the summer he needed to: “step forward and take responsibility…trying to find stability for the football club again.” On one hand it does feel as if he has provided a steadying hand and helped everyone associated with the club to move forward, it also feels somewhat saddening that his decision may have in part been due to some of the almost hysterical over the top invective that has been targeted at him as the O’s have, understandably, taken some time to adjust to playing at a higher level against better quality teams.

On a weekly basis some of the reaction on social media in which it has been regularly suggested that he wasn’t up to the task, and that we needed a ‘proper coach’ must have been so difficult to handle. Then to cap it off came reports that after the game on Saturday his wife had been the target of abuse from members of the travelling ‘support’.

Personally I have always had the suspicion that in order to survive and to build the foundation to push on towards challenging for the play-offs in future seasons, we were perhaps always going to need a more experienced coach at the helm. However it would never have been the right move to even contemplate bringing in such a person until the club had gone through a period of grieving. The loss of Justin put us in a position going into a new season that no club that I am aware of has ever had to endure previously, how could anybody other than a member of the ‘Orient family’ have taken on the role? Instead of being critical we should be grateful that we had someone in the fold selflessly courageous enough to lead us back to some form of normality.

If and when the new gaffer comes in we can rest assured that Justin’s right hand man has laid the foundations that will hopefully see us find some form and momentum and establish the club back where we all know we belong. So thank you Ross for everything you have done for us and all the very best to whoever takes up the reins.

One thought on “An Orient Away Day to Colchester and thoughts on Ross’ decision.”