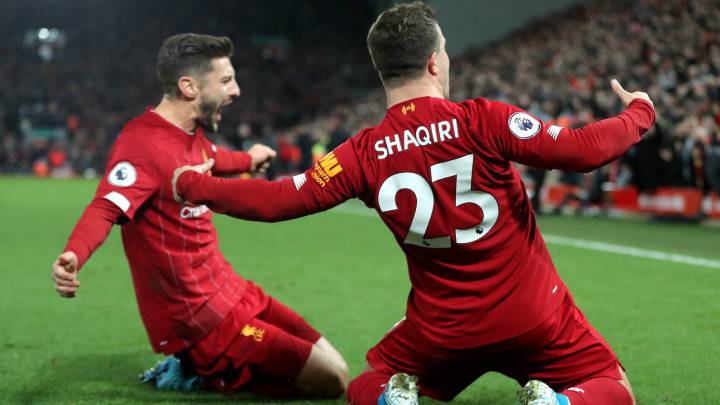 None of my Liverpool supporting family or friends will thank me for this in anyway as they won’t want to jinx it, but with Jürgen Klopp’s side sitting proudly atop the table, eight points ahead of ‘surprise package’ Leicester City and, probably even more crucially, eleven points clear of reigning champions Manchester City; it is difficult to imagine a scenario where the title heads anywhere other than Anfield come the end of the season.

It is an accepted norm of football-watching folklore that no team can win the championship before Christmas, but the sheer relentlessness of Liverpool’s form, which has seen them drop just two points from their fifteen matches this season, makes it difficult to believe that they will open the door sufficiently for anyone to catch them. Their win over Brighton on Saturday thanks to two set-piece headers from Ballon D’Or nominee, Virgil Van Dijk, was the very epitome of the notion that the hallmark of a champion team is to win when not playing especially well. Meanwhile their dismantling of local rivals Everton on Wednesday evening was a further statement of intent not merely another hurdle overcome.

Liverpool’s lead is currently the second biggest at this stage of a season in Premier League history, standing only behind Manchester United’s fourteen point lead in 1993. In other comparable seasons, teams with a substantial lead before the festive period: Chelsea 10 points in 2005, Man United 8 points in 2000, and City themselves 8 points in 2017, have all gone on to win the title.

Of course looming just over the horizon for Liverpool is a run of fixtures through December that has had many commenters and analysts suggesting that the spell of potentially nine games in four competitions including a trip to Qatar for the FIFA Club World Cup could be such a heavy schedule that the Reds will invariably drop points. As imposing a schedule as that sounds, three of those games: the League Cup Quarter Final against Villa and the two potential Club World Cup ties could potentially be viewed as less than top priority.

Perhaps the biggest concern for Liverpool, already likely to be missing key midfield anchorman Fabinho for the whole of December due to injury, is the potential impact of any further injuries or indeed suspensions, although they will be somewhat relieved that goalkeeper Alisson escaped with only a one match ban for his sending off against Brighton.

For their part, City haven’t exactly got the most straight forward of programmes themselves, the 4-1 victory at Burnley on Tuesday evening started their own run of eight matches in three competitions before the turn of the year, although for them the League Cup Quarter Final and final Champions League group game provide an opportunity to rotate the squad to an extent. For City however it is seemingly the case that every league encounter is a must-win game from here on in, unless Liverpool start to drop points in a drastically unexpected fashion. Failure to win the Manchester derby tomorrow evening, assuming Liverpool have done the business at Bournemouth earlier in the day, may even have Pep reluctantly ceding the championship.

It is probably fair to say that City haven’t been at quite the same level as the form that saw them drop a total of just 30 points across the last two title-winning seasons. Injuries to key personnel, Aymeric Laporte in particular, the departure of talisman and indisputable team leader, Vincent Kompany, and the challenge of staying at the very top of their intensity for a third successive campaign, have combined to work against City and their bid for a third consecutive Premier League crown.

In many ways, unless Liverpool start to show signs of faltering, perhaps the men from the Etihad might be better served to focus their efforts on Europe and the ownership’s and manager’s scarcely disguised ambition to win the Champions League and establish themselves amongst Europe’s elite clubs. That is after all why Guardiola was brought in in the first place.

However what of Brendan Rogers’ highly impressive Leicester City, so easily written off as having made a good start but likely to tail off as we head towards the business end of the season? Mind you didn’t we all say that four years ago when the Foxes overturned the odds and went on to win the title in what we then regarded as fairytale circumstances?

This time around Leicester look even more like the real deal, the style of play is more developed it is less about surprising teams and catching them on the break and more about imposing themselves on their opposition. The defence has been tightened up despite losing £80 million kingpin Harry Maguire in the summer, the midfield boasts exciting young talent in the form of Ndidi, Tielemans and especially James Maddison, while up front Jamie Vardy, ably supported by recent recruit Ayoze Pérez, looks even better than in his record-breaking 2015/16 season.

Leicester’s most recent victory over Watford was their seventh in a row and Vardy’s second half penalty saw him score for the seventh match in a row, if they can stretch that run further over the next few weeks the showdown against Liverpool at the King Power on Boxing Day might just provide the opportunity for them to close the gap and have us all believing once again.

Of course this week has also seen the introduction of a third broadcaster to bring us in the UK our Premier League fix, with Amazon Prime streaming all ten ties from this round of matches across three days, an offering they will repeat over the holiday period with another ten matches spread across Boxing Day and the following day.

While coughing up a total of £90 million, or £1.5 million per match, in a three year deal to show two rounds of matches exclusively each season might be a mere drop in the ocean for the United States’ fifth richest corporation, a subscription fee of £7.99 per month, or £79 for the whole year, is a lot to ask from fans already needing Sky and BT subscriptions to watch the self-styled greatest league in the world in its own country. Granted Amazon offer us a 30-day free trial but anyone who has fallen foul of forgetting to opt out at the end of that month will know that isn’t done as a benefit to the customer.

Quite what the Premier League and Amazon hope to achieve through this new broadcast deal isn’t 100% clear, surely just two rounds of matches per season isn’t sufficient to grow the subscription base significantly? Although credit where it is due they have managed to convince some people to sign up to something we thought we had already paid for. Once again it seems the greed of the Premier League knows no bounds!

2 thoughts on “Football Nerd Weekly Ramblings- Is it really too early to say the title race is over? Meanwhile Premier League greed shows no sign of abating.”