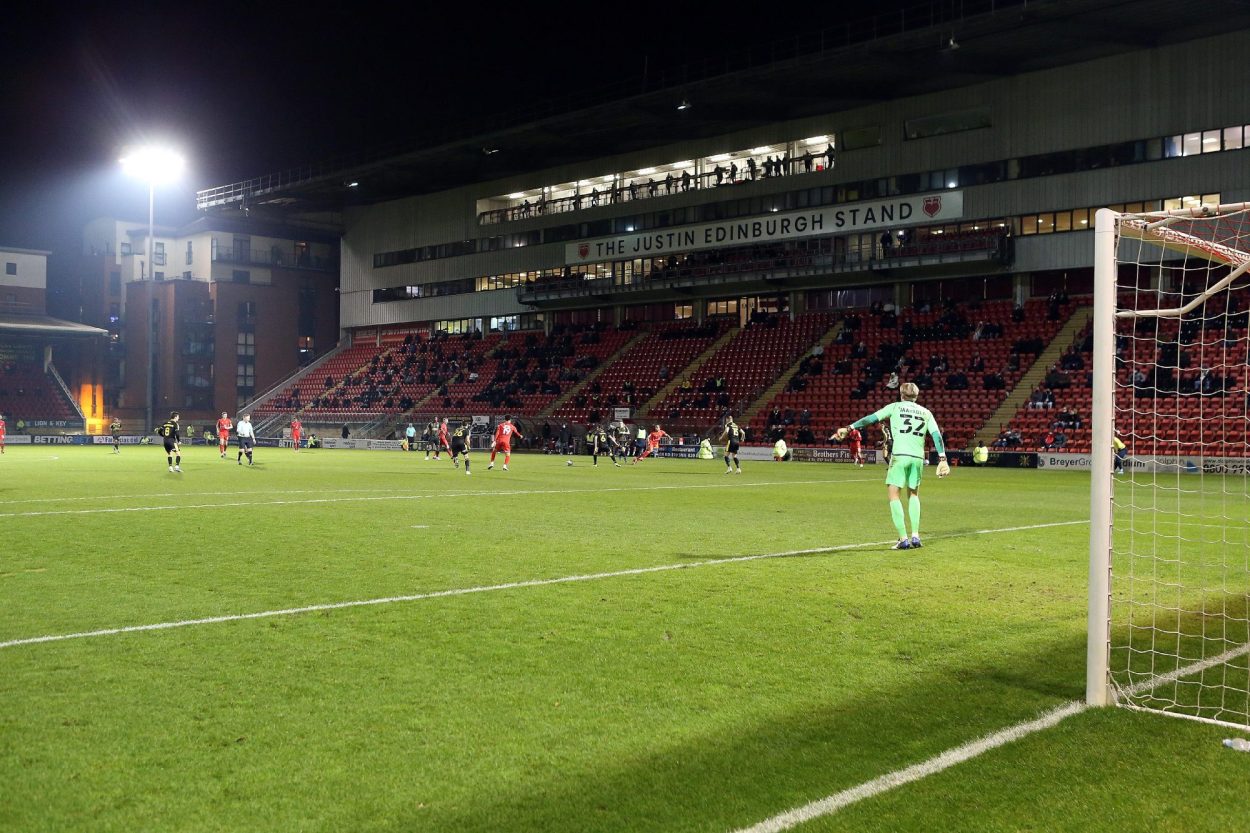 So, let’s start with the disappointing, the 2-0 defeat at Scunthorpe. Winning away games is never a given of course, even against a team that had struggled for form and goals for the most part this season. Scunthorpe had won four league games and scored just thirteen goals with five having come in their previous match against Harrogate Town and were languishing in the lower reaches of the table going into the match. For us to throw it away when the game and all three points should have been in the bag before Loft opened the scoring for the home side is infuriating. DJ missing another penalty and some other very close chances should have put Orient in the driving seat in the opening half hour but in the end we were left to rue not taking those chances and in many ways we only have ourselves to blame.

Team selection and the altered system have been a topic for debate amongst Orient fans when things haven’t gone our way this season, but responsibility for the defeat on Saturday has to rest on the shoulders of the players and not Ross and the coaching staff this time. While it saw us drop out of the playoff places, hopefully temporarily even at this relatively early stage, the chances that we created and the way we played for some sustained spells, especially in the first half, suggest that it may well have been in the words of Peter Kitchen “a bad day at the office” and that we need to “look to bounce back [from it] very quickly.”

With a home game against table-topping Newport County on Saturday followed by games against Morecambe and Crawley Town, the next week or so could be critical to us staying in the promotion-chasing pack going into Christmas. Here’s hoping at least!

Of course the biggest thing to be said about last night’s EFL Trophy game against Bristol Rovers was that for the first time in what has felt like nine very very long and tough months, Brisbane Road was permitted to open its doors to a proportion of the Orient faithful. As a football traditionalist, I of course get the whole #BTeamBoycott against the introduction of Under-23 sides from the Premier League into a competition that should be reserved for teams from the third and fourth tiers, however Mrs Football Nerd and I are too football obsessed to resist the temptation of being able to go and watch our team play. Especially given the 289-day lockout since the Oldham game back in February. So as soon as it was announced that we could enter the ballot as newly minted season card holders, we filled in our form and sent it in. The strange joy we felt upon receiving our email confirming our success is testimony to how hopeless this obsession has become.

With the return to our spiritual home being set for a Tuesday evening in early December, you just knew that the elements were going to combine against us and produce a very chilly evening in E10, the only really surprise was that it wasn’t actually snowing! Believe us though there was a brief moment of hesitation when we wondered if our £10 for both of us getting in might have been better spent watching the game at home brought to us by Dulcet Dave, Matt, Olly & co on the Orient TV stream, but in reality that was never actually going to be an option.

As fun as it has been to be able to watch all the O’s games on the stream, the strange sense of excitement that I felt through the day, that finally after so long away from it we were going to be back into the Orient watching routine tells you all you need to know about the major role that going to football and the structure and routine it gives you plays in our lives. As we headed over to E10 via Stratford, there was a feeling of the familiar yet strangely unfamiliar about it.  Having not really used public transport, save for the odd isolated occasion, since March the social-distancing, facemasks and generally less crowded trains, (well other than the almost as pre-lockdown packed Central Line!), gave a kind of weirdly surreal and almost eerie feel to things. Almost as if we were among the remaining survivors after some catastrophic event that is more normally confined to the movie screen.

Once we arrived at Leyton the missus, presumably operating on autopilot, instinctively went to turn left towards the Leyton Star only to be brought back to reality when I reminded her that the 7pm kick off meant that we didn’t have time for a substantial pre-match meal. As we knew that there would be no beer on sale at the ground we followed the age old tradition of football fans the world over, we made a quick detour via one of the offies on the High Road and enjoyed our pre-match pints at an electrical junction box just outside Coronation Gardens.

Due to Covid safety regulations of course we were allocated a gate where we had our temperature checked before being allowed in to collect our tickets which were strangely to be paid for in cash. Once in the ground, the closed concession areas and lack of fans milling round the West Stand concourse area added to the feeling of strangeness. As we had no other option we decided to head up to our seats, 25 minutes prior to kick-off has to be some kind of record for the Football Nerds as normally that would be judged as valuable additional drinking time in which we could have easily squeezed in one if not two pints.

The club had obviously worked hard to space households safely around the ground and in the vast majority of cases supporters stuck to the restrictions. The applause that the fans gave to the players and vice versa as they headed back into the dressing room for the final preparations were both absolutely right and, if I am honest, a little bit emotional, a recognition of how tough it has been being deprived of what we know and love for so very long.

The best I can say in summarising the game is that the eight changes that Ross made to Saturday’s line-up show where the competition ranks in his priorities for the season. The fact that we were playing a team from the league above was always going to be a big ask, they just seemed that bit better all over the pitch.

Going a goal down then levelling things up, even if for all the world it seemed obvious that Lingy was attempting a cross not shooting, falling behind again to a well-taken free kick from distance but still mounting something of a challenge despite being reduced to ten men early in the second half and then being denied a seemingly clear penalty late on were the positives. For the 574 hardy / desperate souls in attendance though just being back, watching the game across a full pitch and not on a screen and the spontaneous singing, cheering, moaning and jibing at the officials were what we have really been missing and that was the most special part of the evening.

Now it’s onto Saturday and that big game against Newport, having just checked my inbox for the umpteenth time this afternoon I am very pleased to report that Mrs Football Nerd and I have been allocated tickets and in our true home of the East Stand. Right I am off to book a table in the Star for that substantial meal!