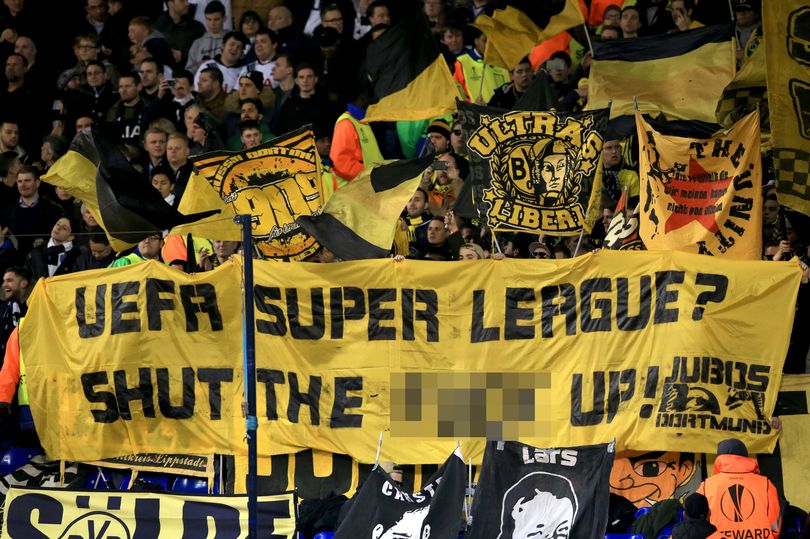 In stories that seem to be becoming increasingly frequent during these financially bleak times for society and of course football, we have had yet another story about the potential advent of a European Super League. This one was revealed by the Times a couple of weeks back and involves a group of fifteen founder member clubs who would allegedly be offered £310 million each to join and could potentially benefit from income of as much as £213 million a season.

The source, the level of detail involved, and the precarious financial situations in which all but those clubs bankrolled from the personal wealth of their owners find themselves, lend more substance to this story/ leak than previous incarnations. It is believed that Manchester United, Real Madrid and AC Milan are the driving forces behind the proposal and that the league would operate over and above domestic competitions, however (for once!) FIFA and UEFA reacted quickly to pronounce that they would ban any player or club who joins the breakaway cartel.

Over the nearly three decades that the Premier League has been in existence, every once in a while murmurings emerge with regard to taking it onto an international stage, of an enhanced competition that could hoover up even more of the global commercial, sponsorship and broadcasting revenue than it already does. In recent years these concepts have grown in their frequency and sadly with a sinking feeling of inevitability for those of us that truly love the game.

First there was the infamous and hugely ill-conceived “Game 39” proposition that emerged in 2008 through which it was mooted that an additional round of Premier League matches would be tagged onto the season and played in  carefully selected international cities (read: lucrative broadcast and commercial markets!). Thankfully that particular money-grabbing initiative was shot down in flames amidst ferocious opposition from those that tend to be forgotten by the money-driven powers-that-be in modern football, or as we like to refer to ourselves: the paying fans. Our counterparts in Spain’s La Liga came even closer to the downright unpalatable, when planned matches between Barcelona and Girona and Villareal and Atlético Madrid in 2019 in Miami looked like they were going ahead only to be scuppered at the last minute, the latter only after court intervention by the Spanish Soccer Federation.

In the years that followed former Chief Executive Richard Scudamore’s brainwave, there were further variations on the theme of expanding the Champions League: already a bastardisation of the true spirit of the European Champion Clubs’ Cup as conceived by editor of L’Équipe, Gabriel Hanot, in favour of greed. Or worse still creating a European Super League with teams included by invite (financial status) rather than merit. Speaking a few years back, none other than Arsène Wenger who knows a thing or two about both football and economics, suggested that a super league was inevitable given the financial “pressure” on the continent’s elite clubs.

During the Covid-19 pandemic and the subsequent lockout of fans from grounds which is now incredibly likely to surpass a year, but for the odd game, the chatter about restructuring the game to favour the rich has only heightened.

First came Project Big Picture: a thinly veiled power-grab led by Manchester United and Liverpool which would have seen the Premier League ‘donate’ £250 million and a share of future broadcast revenues to EFL clubs in return for a trimmed season calendar to allow more space for lucrative European fixtures or money-spinning friendlies/ tours and special voting rights for the Big Six.

Less than a fortnight after those plans were seen through for being exactly what they were, we then had rumours of a FIFA-backed European Premier League to replace UEFA’s Champions League, now we have (yet) another European Super League story. The increasing frequency of these types of stories worryingly suggests that there may be more substance to them than we would like, a classic case of no smoke without fire.

Regular readers of this pages will be aware that for some time now I have felt a growing alienation from modern football, more specifically from the game at the very highest level in England and across Europe. This doesn’t mean that I enjoy watching the games any less, or that the number of games I watch every week is decreasing (just ask Mrs Football Nerd who when I told her that my survival strategy for this third lockdown was to watch more football, she almost fell off her chair before enquiring exactly how I was going to achieve that unless I had somehow found the secret to increasing the hours in a day or indeed the days in a week!),  just that increasingly it feels less and less like the game that I fell in love with all those years ago.

Part of the distance that I am feeling is no doubt fuelled by our ongoing inability to attend any matches in person, save for two appearances at Brisbane Road when Boris and his chums thought that us in England might be on the way out of the pandemic. Oh, how misguided that seems now! However, part of it is also the realisation that even watching on TV, the key ingredient that makes football such a dramatic, entertaining and downright enjoyable sport is the atmosphere created by the fans. The live stadium audience if you will.

I wrote the other week about how “the empty stands and lack of atmosphere make it virtually impossible to differentiate one match from another”, because football has been confined to the TV screens for the best part of eight months, and if we are being complete honest with ourselves looks like being so for some considerable time to come, it has been shorn of what makes it so special. The real magic of being a follower of football is the structure and routine that it gives to your life, the focus and distraction that you know will come at the end of each week.

While we live in hope that at the lower levels of the game one day, however far in the future, we will go back to the normality of watching our teams at our spiritual homes, increasingly, and this is something I have touched upon a number of times through the ongoing lockout of fans, I am not sure my relationship with the Premier League will ever be the same again.

My ennui towards the self-avowed “greatest league in the world” has in no way been helped by my chosen football reading list since the turn of the year, which has taken in three excellent books that focus on the evolution of the Premier League and its clubs since that seismic change to football brought about by its birth.  These are: “And the Sun Shines Now: How Hillsborough and the Premier League Changed Britain,” by Adrian Tempany; “The Club: How the Premier League Became the Richest, Most Disruptive Business in Sport.” by Jonathan Clegg and Joshua Robinson and “Killing The Game: The inside story behind the transformation of Manchester City and the creation of City Football Group.” by Daniel Slack-Smith; all well-written and very interesting books that I would definitely recommend, however none of the three will do anything to make the typical football traditionalist any more enamoured with the modern game.

The pursuit and accumulation of wealth, or to give it its more appropriate term: greed, is by its very nature never-ending, too much will never be enough for the monied elite of the Premier League. In a football context anything that continues to ignore the fans who are after all, or at least we used to be, the very lifeblood of the game, and reduces top-level football to the very essence of what it has become: a global media entertainment entity more about commercial and broadcast revenue generation than sporting competition.  Even its self-avowed rival for the world’s broadcasting lucre, the Unite States’ NFL, has a draft system and salary cap to continue to strive to make it competitive. If the future of a closed-shop European (or worse still World!) competition does ever get off the ground, will anyone actually care which set of mercenary players temporarily located in one of the chosen markets wins the [Insert Premium Sponsor’s Name]SoccerBowlUberCup or whatever they decide to call it?

One thought on “More rumours of a European Super League: a clear indication that football’s never-ceasing pursuit of wealth is ruining the game as we used to know and love it.”