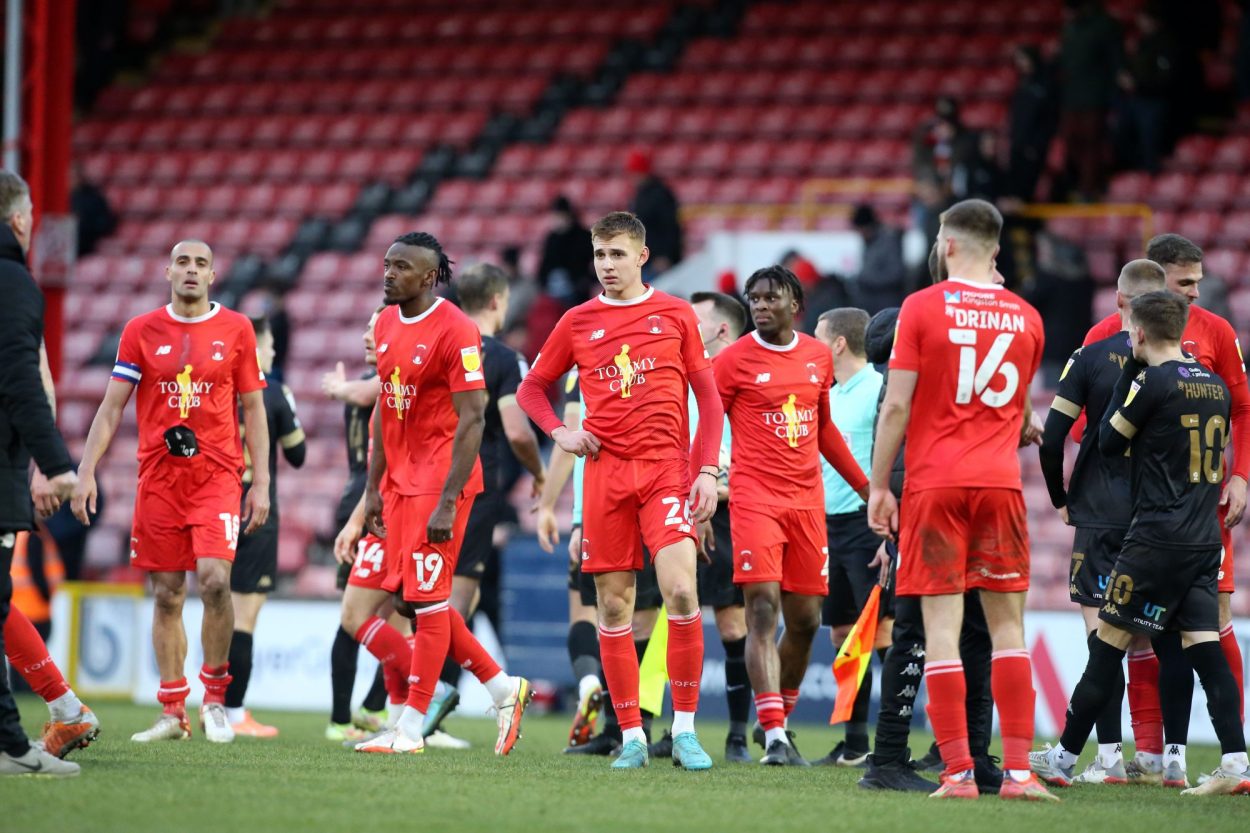 For 20 minutes or so on Saturday we had hope. For the first time in as long as probably any of us can remember, Orient looked like a team with a purpose. At long last we started a match with impetus, quickness, and slicker movement when we had the ball, supported by aggressive pressure on the opposition when we didn’t. For a brief interlude it offered hope that we might snap ourselves out of the woeful run of form which we have been enduring since the early days of December.

As the first half wore on however, it started to become all too clear that we couldn’t maintain that level of intensity and as we inevitably started to tire, Salford very visibly started to gain more of a foothold in the game and as half-time approached were very much the team in the ascendancy, if not in complete control of the match.

At the start of the second half Aaron Drinan missed yet another very presentable chance when he familiarly pushed wide when it actually looked easier to hit the target, yet another to add to his growing catalogue of glaring recent misses. As soon as that happened, I felt any belief that I had rekindled in the team starting to drain from me, and when Shephard put the visitors into the lead a mere matter of minutes later, I resigned myself to yet another seemingly inevitable loss. When Vassell made it 2-0 on the hour mark, it felt more like an expected formality and any lingering hope, however feint, was gone.

When asked by Dulcett Dave in his post-match interview whether he felt that “promotion ambitions had now turned to relegation fears”, KJ’s rather surprising response was to suggest that “they did a few weeks ago.” He then went on to say: “that when things go wrong for us, we fall away quickly and fall away quite a long way.” There was also a slight hint that there may be some complacency creeping into some of the players who perhaps think that League 2 is beneath them. Wakeup call to the playing squad: the way you have been playing suggests that in actual fact the National League may be too high a level for all but a very few of you!

Obviously there is no point in trying to sugar-coat our recent run, or in deluding ourselves that everything is fine and it is only a matter of time until we start to win games again and surge up the table, but I am not sure whether I found the manager’s candour and honesty refreshing or even more alarming than the way we are playing. It isn’t often, even when it is plainly obvious to everyone watching, that a football manager admits when things are going badly wrong.

Over the last few weeks Nigel Travis has been at great pains (in both his solo Q&A and again on last week’s LO Down podcast) to suggest that KJ has been fully involved in the recruitment process, and that it certainly isn’t the case that players have been brought in and Jackett asked to work with them. As we are not privy to what goes on behind the scenes, we have to take the chairman at his word, even if performances on the pitch and results might suggest differently.

So where has it all gone so drastically wrong? While things may not have been perfect up to the defeat by Crawley at home, we have gone from a team sitting 2 points outside the play-off places to one that is languishing just 7 points above the drop zone without a clue where the next 3 points might come from. Can it really all be traced back to that ill-fated trip to the Wirral to face Tranmere with just 15 fit players and the loss of Tom James and Craig Clay to long term injury? At the risk of repeating myself yet again: as good as both those players were in the opening months of the season, it simply cannot be that straightforward.

Perhaps a more illuminating way to look at it is that even in those days when everything seemed positive, we still managed just 7 wins out of 21 games played. Yes, there were the comprehensive wins over: Exeter, Bradford, Oldham, Hartlepool, Sutton and Swindon at home and our single away victory at Bristol Rovers, but there were also frustrating draws on our travels (forgive me as I don’t want to list or relive them all again!) and at home to Mansfield and Walsall, as well as those capitulations at home to Harrogate and at Port Vale and away at Northampton. Which suggests that maybe the feel-good factor we were feeling might have been built upon false hope rather than any firm foundation.

For me it seemed to take a while for the first choice eleven and system of play to take shape at the start of the season, understandable given how much of the squad was new to the club. Once it did, we started to look decent which built up supporters’ hopes. However, over time other teams sussed out our approach and developed means to stifle us. I also can’t help but think back to that rainy day in Stoke at the very beginning of October where we somehow contrived to throw away a late lead and all 3 points in injury time as a key turning point. It seemed to knock the players’ confidence and we have mustered just 3 wins since that fateful day.

Whatever the underlying reasons, and whether we like it or not, things are starting to look serious for the O’s. Unless we start to get some points on the board, the spectre of a real relegation battle is starting to loom ever larger. An ignominious return to non-league which once seemed unthinkable, is now starting to creep into the thoughts of the majority of Orient fans.

With a total of 17 games to go and 51 points to play for, there is still every chance for Orient to start to pick up points more regularly and move towards mid-table safety/ mediocrity (depending on your personal disposition); but the way we are playing at the moment you would be hard pushed to identify where in the remaining matches we could potentially get a result. Out of the 8 teams that are below us in the table, the only one we have beaten is Oldham and their own troubles have been highly publicised, worse still we have to face them away from home.

To try to end on a positive note, 2 or 3 wins over the next month before we face runaway league leaders Forest Green would lift the mood around the whole club and make us all feel that bit better about things. Harrogate tomorrow (assuming it goes ahead!) and Bristol Rovers on Tuesday night would be an excellent place to start.

One thought on “Orient Nerd Weekly Ramblings- When will this misery end? Orient crash to their third consecutive home defeat and stretch their winless run to 9 games.”