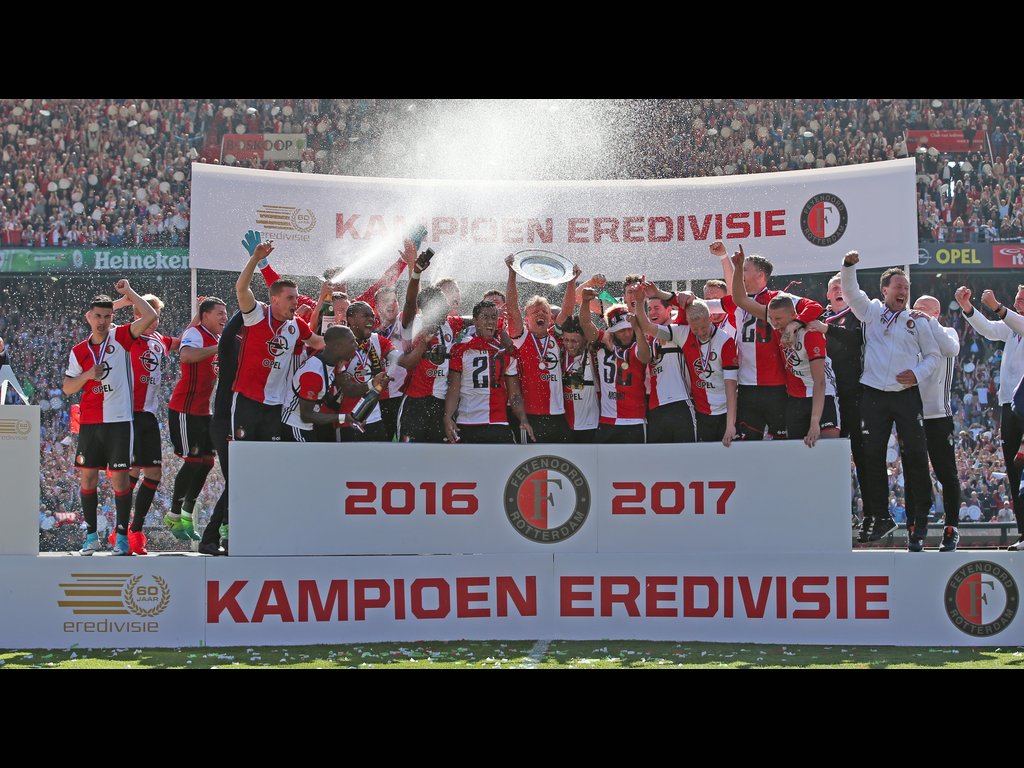 Ever since the recommencement of the Eredivisie season after the winter break, there was a feeling that, at long last, my boyhood club Feyenoord was on a path to fulfilling its destiny and securing their first league title since 1999. As the weeks passed and the momentum grew, that feeling only got stronger. The self-same club that had conspired to lose seven straight games in the run-in in the previous campaign reeled off six wins in a row without conceding a goal and then beat reigning champions PSV at the end of February to maintain pole position in the title race, thanks to a goal that could only have been awarded as a result of the newly introduced goal-line technology.

As belief continued to grow that De Club van het Volk (the club of the people), might be on the verge of re-establishing themselves amongst the true superpowers of Dutch football; I found myself focusing more and more of my attention on the championship race in Holland; no doubt helped by Arsenal’s woeful performances through February and March.

As the pressure started to bite there were inevitable wobbles, first on the plastic pitch at city rivals Sparta and then in Amsterdam to perennial enemy and only other contender Ajax. Somehow though they did just enough to keep the lead and when Ajax fell to defeat in Eindhoven at the end of April, the title-winning equation was crystal clear: win one of their last two games to be crowned champions for the first time since the turn of the century.

Through the run-in something strange was happening in the Football Nerd household, freshly back from her second game at De Kuip at Easter, it wasn’t just me that was being drawn deeper and deeper into this title chase, but Mrs Football Nerd was as well, as she explains:

My husband first insisted on me going to Rotterdam for my birthday trip in 2015, while I fell in love with the city my only experience of Feyenoord, at that point, had been being dragged round the ‘obligatory’ stadium tour which was of course unfortunately completely in Dutch, and having purchased myself a t-shirt in the fanshop due to it being in the sale rather than any sense of affinity for the cub.

‘Encouraged’ by Football Nerd, who was desperate for me to experience a match at De Kuip, I organised a work conference in the city last September which, not accidentally, coincided with Feyenoord hosting ADO Den Haag. This was the game where the away fans threw teddy bears down for the local hospice kids which was one of the nicest things I have ever seen football fans do. After that experience I found myself wanting to go back, especially as the title race was intensifying and took the lead in organising another trip to see Feyenoord at Easter for the crucial visit of FC Utrecht. Even the cold that day couldn’t dampen the mood when the first goal went in and the whole stadium erupted, it was nothing I had experienced at a match before and from that day forward I was hooked and Het Legion had gained another member.

Of course with such a commitment comes the rollercoaster of emotion that is part of being a true football fan and in the penultimate game of the season, as the husband went off to watch Arsenal, I sat alone and watched Feyenoord fall apart at Excelsior when they could and should have won the title. I cried on the doorstep convinced that the chance was going to be blown and the city we love so much thrown into a deep state of despair as they watched the title slip away to that team from that city for which they have nothing but scorn.

It was within this context that we entered last week, despite a normal working routine, our thoughts were never far away from the game on Sunday against Heracles. I had to make the tough choice of turning down a trip to Wembley to watch Tranmere Rovers attempt to gain promotion back to the Football League, as I knew there was simply no way I could not watch this match. Briefly we flirted with the idea of flying to Rotterdam for the weekend just to be there, knowing that there was no chance of a match ticket, but eventually common sense prevailed having looked at how much it would have cost us!

On the morning of the match itself we were sick with tension, not knowing what to do to kill the hours until kick-off and then when, finally, the TV coverage kicked in and the teams emerged in front of the frenzied De Kuip crowd, it was time to arm ourselves with some medicinal beers and get ready for what promised to be a tortuous 90 minutes of football.

There was barely time for the smoke from the pre-match fireworks and flares to clear before talisman Dirk Kuyt burst through the inside right channel, seized on a loose ball in the penalty area as the covering defender slipped and calmly slotted it inside the far post. De Kuip exploded, pandemonium all around the place, you could literally feel the tension slip away, as the traditional ‘I will survive’ goal celebration anthem sparked up through our television speakers and we joined the madness, our living room temporarily transformed into a mini-De Kuip, quite what our neighbours thought was anyone’s guess!

Just over ten minutes later, maverick winger Eljero Elia, one of the missus’s favourites, worked some space for himself on the left, whipped in a right-footed cross for Kuyt, flying through the air like a missile, to power home a header for 2-0. Cometh the hour cometh the man as seemingly the captain had decided he was going to do everything in his power to ensure there were no slip-ups this time around.

The remainder of the game was just a case of seeing out the result, there were some slightly hairy moments at the back but any lingering doubt was put to rest with less than ten minutes to go when Jørgensen had his shirt pulled in the area and the referee pointed to the spot. There was never any doubt about who was going to take it and up stepped Kuyt to seal the club’s second trophy since his return two years ago.

A late consolation by Heracles did little to dampen the celebrations amongst the players, on the benches, in the stands, in the city centre or indeed in our living room and when the final whistle came, the long overdue party could finally get underway.

I do remember the last time Feyenoord won the league back in 1999 but that had to be enjoyed very much from a distance, this time having been able to get over to De Kuip to watch a couple of matches and to pretty much be able to follow all the rest of the campaign on TV it has been possible to feel completely part of it.

At the same time, the nature of this Feyenoord team is that it is truly one where it feels like the whole is greater than the sum of the individual parts. The squad was made up largely of a combination of veterans, journeymen and emerging youngsters, knitted together perfectly to create an ideally balanced team that combined defensive resilience, attacking threat and an indefatigable will to win which was expertly marshalled and guided by rookie manager Gio Van Bronckhorst.

What also stands out about them was the personal stories of some of the key members, goalkeeper Brad Jones who despite an unremarkable career and tragedy in his personal life, losing his six-year old son to leukaemia in 2011, established himself as the first choice keeper and a solid last line of defence. Young rising star midfielder Tonny Vilhena who rejected the advances of Leicester City and AC Milan in order to stay near his mother as she battled cancer and has now signed a new deal in response to how supportive the club and fans were to him when she sadly passed away.

The final word however must centre on what the team’s leader, talisman and inspiration said about his return to the cub where he was adored, said in announcing his retirement yesterday, “I came back to win prizes and to be champion with Feyenoord. All my dreams are accomplished.”

From those of us who watched the story evolve we have to say a huge thank you to Gio, Dirk and all the boys for a season in which you not only rekindled our faith that football is still football, not completely spoiled by the ever-increasing riches; but also for making us realise that sometimes if you just keep the faith you never know where that may take you.