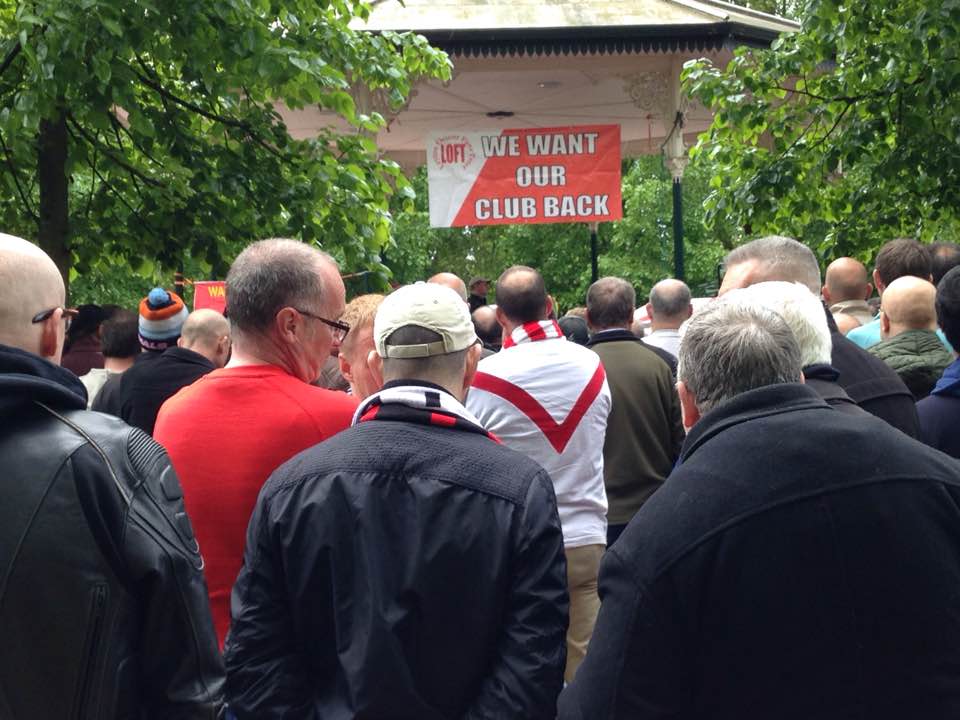 It wasn’t supposed to turn out like this, in May 2014 as the (at the time) soon-to-be-Mrs Football Nerd and I walked out of Wembley reflecting on how Leyton Orient had been just two missed penalty kicks away from a place in the second tier of English football, we were full of hope and optimism about where the club was headed. Just three years later however the club lies in disarray, on the verge of extinction based purely on the actions of one man.

The problems started not long after that fateful day at Wembley when lifelong Orient fan and successful sports promoter Barry Hearn sold the club that he had lovingly run for 19 years; the problem wasn’t so much the fact that Hearn sold the club as who bought it. The buyer Francesco Becchetti made his fortune through waste management and recycling in Italy and over the course of his short but cataclysmic tenure has taken the club from the brink of the Championship to non-league football in the space of just three seasons. It is barely credible that anyone wilfully intending to destroy a club could actually do so in such a short timescale; yet whether deliberately or not that is exactly what Becchetti’s divisive reign has achieved.

While it cannot be argued that Becchetti hasn’t put money into the club, a reported total of £6m being pumped in on top of the £4m he paid to Hearn in the first place, the decisions that have been made on how that money should be used have resulted in the spectacular mess that the club now finds itself in. As Hearn himself put it: ‘With 10 managers (now 11) in less than three years, it beggars belief. Signings, tactics, interference, every bad thing a chairman could be. I can’t understand his plans or motives or what on earth has gone on.’

Not a single member of the talented matchday squad remains from that ever-so-nearly glorious day at Wembley and Becchetti has gutted the once-proud community and family club, dispensing with long-standing and respected club employees, forcing out popular manager Russell Slade, interfering in team selection and then getting the club into such a financial mess that the players threatened to go on strike over unpaid wages last month. Rock bottom was reached when relegation out of the Football League for the first time in 112 years was confirmed the previous weekend with a 3-0 defeat at Crewe prompting Hearn to resign as honorary life president.

Despite all that has happened and the desperate situation in which the cub finds itself, or maybe even because of it, Mrs Football-Nerd and I felt that with a free Saturday we simply had to get ourselves down to Brisbane Road (despite all that Barry Hearn has done for the club we still can’t bring ourselves to refer to it by its sponsor’s’ name!) to show some solidarity at what was going to be Orient’s last home game in the League against Colchester United. Our connection with the club is based on the missus having lived in Stratford and having been a regular on the terraces watching the O’s back in the late 90’s in the early days of Hearn’s ownership and when they came so close to escaping the fourth tier losing play-off finals in 1999 and 2001.

As we exited the tube station, picked up our tickets and headed for the Leyton Technical sited in the former town hall and quite possibly the quirkiest pub in London; it seemed we were not alone, the place was packed. We then discovered even more fans when we stumbled upon Leyton Food Market in Coronation Gardens, immediately adjacent to the ground, which provided not only an excellent refreshment stop on the way to the match but a good place to rally the fans in protest at Becchetti’s regime.

The attendance of just below 7,000 demonstrated not just how loved the club still is but also the strength of feeling for wanting to show defiance, to show the rightly maligned owner that whatever he does and however low things have to get, there will always be hope. In truth there is still some hope, the Leyton Orient Regeneration Fund launched by the Leyton Orient Fans Trust (LOFT) has so far raised £140K with the intention of securing a better future for the club either through negotiated sale, administration or liquidation with the potential launch of a phoenix club in a similar vein to AFC Wimbledon; with Hearn vowing to support a viable plan to secure the club’s long-term future. Although it may well be that things have to get worse before they get better, the promise of a brighter future may be just enough to keep the supporter-base going.

The match itself was played to a background of abuse from the Colchester fans which consisted mainly of them letting us know how rubbish our protest was (little did they know what would transpire later!), prompting a response from quite possibly the lamest football hooligans ever, suggesting ‘they were idiots’. Despite Orient’s best efforts to get the ball down and try to play, it was Colchester that looked the more threatening. The visitors deservedly took the lead in the 26th minute thanks to a header from Tarique Fosu.

The O’s equalised early in the second half thanks to a brilliant long-range strike from the impressive Portuguese midfielder Sandro Semedo. However with ten minutes to go an under-hit back pass allowed Fosu to set up Porter for Colchester’s second, followed two minutes later by a third which prompted our departure to beat the crowds back to the Technical to reflect on the afternoon. Unbeknownst to us and all the others who crammed into the bar though we missed the protest pitch invasion that saw the match abandoned and eventually finished behind closed doors later in the evening. In many ways that farcical conclusion seemed highly fitting to what has been allowed to happen to the once-proud club.

For us despite the understandable frustration of the more regular support, we had enjoyed a true football experience and one we have vowed to repeat whenever we get a chance next season. We can only hope that we can do our small bit in trying to help the club towards a more certain future; to lose a true community-based club like Orient would feel like a real tragedy brought about by the greed of modern football.

2 thoughts on “The Terrible State of Leyton Orient- Is this the end for a true Community Club?”