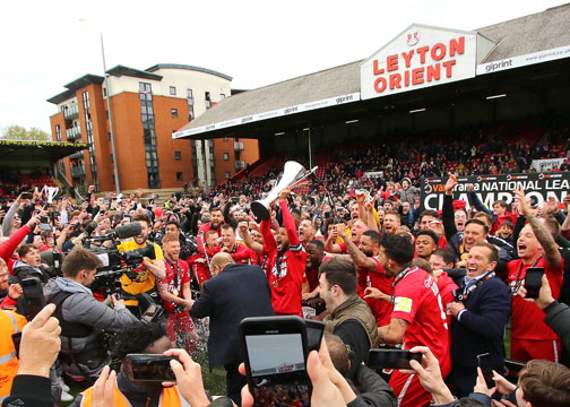 Almost two years ago to the day, Mrs Football Nerd and I embarked on an emotional and wondrous journey. We didn’t realise at the time, but a straightforward choice to go and watch Leyton Orient simply because the missus used to live nearby and we had followed their near promotion to the Championship just three years previously, resulted in a football supporting adventure that neither of us will ever forget.

The day that we chose to go to Brisbane Road was the day, with relegation out of the Football League already confirmed, that was marked with protests against the malevolent owner Francesco Becchetti, and when a pitch invasion saw the suspension of the match against Colchester United forcing its completion behind closed doors. What struck us most about the experience was that nearly 6,000 supporters felt compelled to show their ongoing support despite the trials and tribulations the club and its followers were being forced to endure (https://football-nerd.org/2017/05/05/the-terrible-state-of-leyton-orient-is-this-the-end-for-a-true-community-club/).

As a pair of self-avowed football obsessives something had stirred within us that we perhaps didn’t fully realise at the time, and we vowed that despite the club being out of the Football League we would make a concerted effort to try and go on a more regular basis. Little did we know that that innocent commitment would take on a life of its own as we found ourselves being consumed more and more hopelessly by our love for this incredibly special club.

Regular attendance became attendance at every home game we could possibly manage and then away games as well, as our support took hold of us and became more addiction-like and beyond merely a simple matter of choice. Thankfully Arsenal’s fall from the Champions League and subsequent Sunday-Thursday-Sunday routine has freed yours truly from Saturday Emirates Stadium attendance for the most part and allowed room for the growing importance of Orient.

At the same time something magical was happening within the club and on the pitch, from a position of not even knowing if the club had a future in the summer of 2017 and having to pull together a squad from essentially nothing, we started to see that the new owners, our saviours: Nigel Travis formerly CEO of Dunkin’ Brands and Texan business man and principal investor Kent Teague, had a clear plan for getting the club back to where they knew it belonged.

The arrival of manager Justin Edinburgh in the autumn of 2017 was pretty much the last piece of the ownership and management puzzle. After a run of fifteen games without a win under predecessor Steve Davis, Edinburgh stabilised performances on the field by stopping the team conceding too many goals. The seeds of what might be in the future were sown when the O’s humbled top of the table, at the time, Sutton United 4-1 in December, in Edinburgh’s first home game in charge. Eventually Orient finished in mid-table that season but the recruitment, organisation and team selection suggested a much brighter future.

This season Orient have looked like a team on a mission, despite a wobble in the winter, they have been at or just off the top of the table for the entire campaign until going into last weekend and their final home league match of the season, all that was needed was a solitary point to secure the title and the one guaranteed ticket back to the Football League.

TV scheduling regulations meant that all the National League games were due to kick-off at 12:30, which represented good and bad news in the Football Nerd household: good from the point of view that we wouldn’t be hanging around for the whole day waiting to discover our fate, and bad from the point of view that we weren’t sure that the pubs would be open sufficiently early to help us to calm our nerves! Thankfully a quick check on Twitter revealed that, showing true business sense, the local hostelries were opening at 10am.

Having established that we have seen the O’s win, lose and draw whichever of the three pubs nearest the ground we have used, we plumped for the Technical based on the simple notion that it was on the way to the ground. It seemed we weren’t alone in our thinking as there were a few O’s fans dotted around the place as we walked in and a steady stream through the door while we were sitting there enjoying our ‘breakfast’.

With an hour and a half suitably killed, we decided that we wanted to go and soak up some of the atmosphere inside and headed down to the ground via the usual route through Coronation Gardens, reminding ourselves not to touch the ball on the Laurie Cunningham statue after we had clearly jinxed the team by doing so against Maidenhead back in February.

Even before the teams emerged the entire place was crackling with tension, expectation and the pure and utter emotion of a match and day that could maybe…just maybe, deliver so much.

In truth it wasn’t much of a game but none of the 8,000+ Orient fans in attendance cared in the slightest, the day was about way much more than winning or losing, it was about redemption after the oh-so-dark days of the recent past. Late in the second half top scorer Macauley Bonne turned the ball home from a Joe Widdowson cross and the place erupted, for a brief moment there seemed a very real danger that the floor of the East Stand might be in danger of caving in again, only for us to notice the linesman’s flag raised.

Our disappointment turned to uncontrollable anticipation moments later when news filtered through that Salford were 3-1 down at Hartlepool, now it was just a case of seeing the game out and everything we had dreamed of over the last two years would come true.

On the final whistle the stands emptied and we streamed onto the pitch, of course we had all been warned not to encroach onto the playing field, but everyone knew that the warnings were merely following procedure, and while the club couldn’t actively encourage us, how could they deny those same people that had invaded the pitch in protest two years previously this shared moment of joy and utter relief?

The trophy was raised and we retreated to the sidelines to allow the players, management and owners their lap of honour. Mrs Football Nerd got to meet one of her favourites, goalkeeper and steadying force Dean Brill, while I shook hands with and thanked Justin Edinburgh and Kent Teague, only for them to thank us the supporters.

Back in the Technical glasses were raised and songs were sung through the afternoon and into the evening, no one wanting this magical day to end. With Wembley still to come in just over two weeks’ time there is every excuse for the celebrations to continue, with many many more renditions of “We are the Champions” between now and then.

In reflection it has been a hell of an adventure over the last two seasons, whatever the future holds all we can do is thank Nigel, Kent, Martin, Justin, the players and everyone involved with the club, for picking us up from our lowest point and making our dreams come true. Now go and win the double!