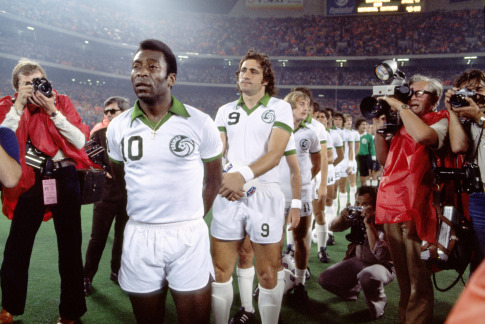 After all the fun of our breakfast time Arsenal watching (https://football-nerd.org/2017/09/22/football-in-a-soccer-world-reflections-on-a-weekend-in-new-york-city-part-1/), Mrs Football Nerd and I spent the afternoon wandering through Manhattan’s Sunday street markets and watching the dance skaters in Central Park, before undertaking the long subway ride from Manhattan down to Coney Island. However It wasn’t the funfair or Nathan’s Famous Hotdogs that formed our primary motivation in undertaking this trek, but the fact that the New York Cosmos had relocated to MCU Park, the home of the very minor league Brooklyn Cyclones baseball team, nestled on the boardwalk, overlooking the ocean and next door to the famous amusement park.

My original obsession with this fantastical-seeming team, which during its heyday in the late seventies had boasted such world class names as Pelé, Giorgio Chinaglia, Franz Beckenbauer and Carlos Alberto, was piqued when as a family we moved to the States in the early eighties. While I was never fortunate enough to see them play live, the name, the seemingly out-of-this-world magnitude of the club and the impact they made on the US and world stage, created an intense fascination in a team that to a nine year old boy seemed like something that you would normally find within the pages of the Roy of the Rovers comic.

The story of the NY Cosmos, from humble beginnings through their meteoric rise to prominence to their current plight is simply extraordinary. Launched in 1970 as a team comprising unheard of college players alongside journeymen and ex-pats from South America and Europe; the huge financial backing of the Warner Brothers corporation catapulted the name into the sporting stratosphere when in 1975 the Cosmos pulled off what has been described as the ‘transfer coup of the century’ acquiring, after years of pursuit, the greatest of them all, Pelé.

While the arrival of the Brazilian legend was soon followed by the other superstar names, it wasn’t until 1977 that the team were to realise the grandiose vision of its founding fathers, the president of Warner Brothers Steve Ross and English football writer Clive Toye, when they won the championship, the Soccer Bowl, for the first time, and attracted crowds of up to 70,000 that made them serious players on the New York sporting scene.

Pelé retired at the end of the 1977 season but the Cosmos went on to win a second successive Soccer Bowl title in 1978 before being eliminated at the semi-final stage the following year. Further titles followed in 1980 and 82, and while the actual play on the field may not have been anything to rival the more traditionally viewed great teams of world football, the associated razzamatazz and hoopla wherever they played seemed something more grandiose than a mere football team, more akin to a travelling circus or a rock n’ roll tour; Warner Brothers having backed them with all their over the top marketing might and celebrity connections.

With such success and as the only team capable of drawing such large attendances, the Cosmos almost outgrew the North American Soccer League (NASL), and in many ways their bloated profile was a major contributing factor to the league going bust in 1984, consigning the almost mythical Cosmos name to history.

Despite numerous attempts to revive the team and the advent of the MLS, it wasn’t until 2010 and a proclamation by none other than Pelé himself, now honorary life president, that the Cosmos were to be brought back to life. Their first match back was in true style a friendly against Manchester United at Old Trafford, but they were to be denied entry into the MLS, instead (re)joining the re-launched NASL, now essentially the US second division, in 2013.

Since their rebirth the Cosmos have won 3 league titles, 3 seasonal titles, attracted big name stars like Marcos Senna and Raúl and played in high profile international friendlies; in many ways the approach of the team has endeavoured to follow the same formula as in the halcyon days of the late seventies. However marooned out at Hofstra stadium on Long Island, the site of their initial foundation but around 20 miles east of downtown Manhattan, they struggled to draw fans in any great numbers. The move to Coney Island being made with a view to being closer (if only slightly) to the city may have come too late.

At the same time New York’s sporting landscape has shifted, now alongside the enduringly popular draws of the city’s baseball, American football, basketball and ice hockey franchises; the flourishing NY Red Bulls and the relatively new but already popular joint soccer venture between the New York Yankees and Manchester City, New York City FC, occupy the space the Cosmos have long coveted. As a result, as was the case three decades ago, the Cosmos and the NASL are in danger of extinction once again.

The competition was reduced to just eight teams in 2017 as a result of defections to the United States Soccer League, bankruptcy and Minnesota having been invited to join the MLS as an expansion team; which led the United States Soccer Federation to threaten not to sanction the NASL as a second division league for 2018. Unless the NASL is able to overturn that decision it will leave the Cosmos in the soccer wilderness once again.

So it was with heavy hearts but also a sense of melancholic nostalgia that we made our way to watch this once world-renowned football name. Arriving just before half-time we were shocked to find that the Cosmos were already 2-0 down to the relatively fledgling Jacksonville Armada. Having made the long journey we consoled ourselves that we would at least enjoy the match as a day out.

MCU stadium being a minor league ballpark is far from ideal as a venue for football as it is the wrong shape and the majority of the seating is too low to afford a decent view. However after some half-time exploration we settled on a place on the halfway line on the raised concourse, next to a guy in a Cosmos t-shirt who looked like he had been here before. As it transpired our new friend Tomas, of Polish origin but now resident in Staten Island, was a regular and he gave us the rundown on the team, the league and the ongoing political issues.

As the second half got underway, surprisingly the football on display wasn’t as bad as we had expected with both teams at least trying to play a bit, although the roughly laid turf tiles across the baseball diamond and the breeze coming in from the ocean didn’t aid their cause. Despite the best efforts of the Ultras in the bleachers behind the goal at the outfield end, the crowd was so sparsely spread around the park that it was difficult to generate any kind of atmosphere.

Just past the hour mark Jacksonville made it 3-0 from the penalty spot and the game was seemingly over. As we started to console ourselves with the thought that despite the seemingly inevitable defeat we at least still had a visit to the Nathan’s for the legendary hot dogs and an evening at the amusement park to potentially salvage our trip out, the Cosmos sprang into life. Although, with ten minutes to go and still three goals down, Tomas explained that this seemed like even being beyond a team that has become known as the ‘Cardiac Cosmos’ due to their history of astonishing comebacks, oh ye of little faith!

First Javi Márquez pulled one back with a low shot from the edge of the box, then in the last minute Eugene Starikov thumped a header home to make it 3-2. Just as we were about to give up hope in the fourth of five added minutes, Juan Guerra cut in from the left and rifled a shot into the top right hand corner, sending what was left of the crowd into raptures. Pretty it hadn’t been but for fun and excitement it couldn’t be faulted.

As we said goodbye to our new football obsessive friend Tomas and headed for the bars of Coney Island and the rides of the amusement park, we reflected on a unique football experience. It would be tragic if the Cosmos were to be lost once again, and while the future doesn’t look great, I can think of a few hundred people, including two fans from the UK, who live in hope that the glory days may yet return.