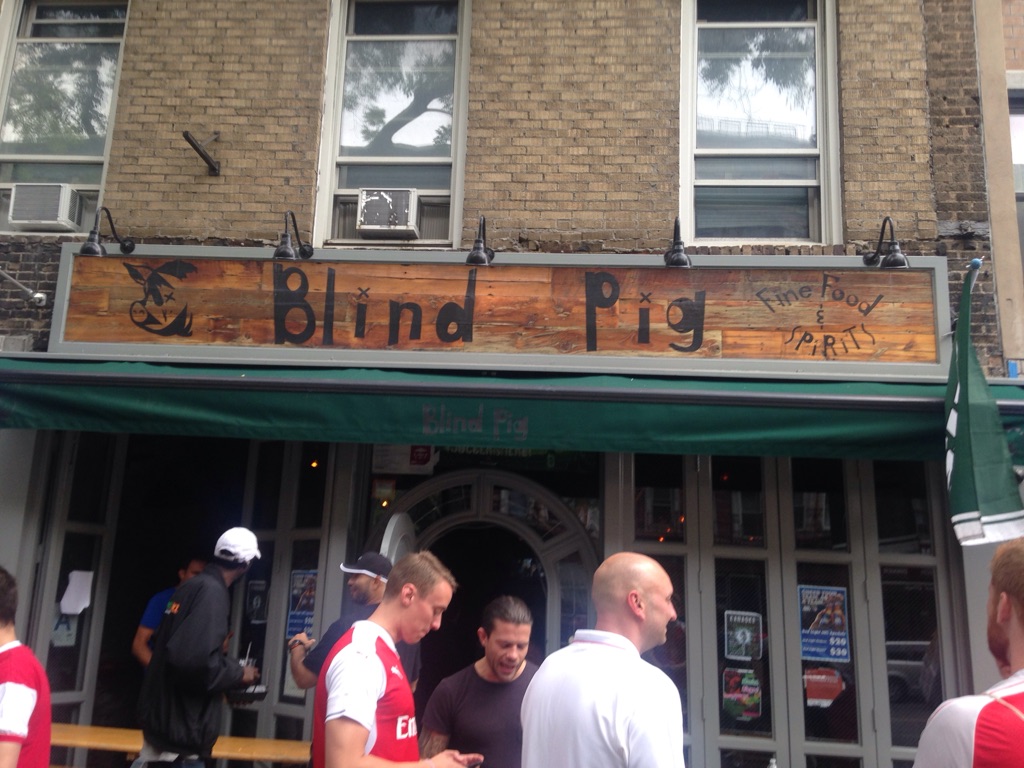 Spending two years of my childhood living in New Jersey has imbued me with a certain sense of identification with the metropolis that is New York City, the strength of the bond created means that Mrs Football Nerd and I like to try and visit the city on an almost annual basis.

Our most recent trip last weekend, while obviously carefully coordinated with the Arsenal fixture list, coincided with the Gunners’ visit to Stamford Bridge; although worryingly the lunchtime kick-off in the UK meant that it would start at 8:30 am US time, surely even in the city that never sleeps this would mean that we wouldn’t be able to watch it? A hasty email was fired off to the NYC Supporters Club’s adopted bar, the Blind Pig on 14th Street in the East Village, enquiring whether the fact that they stated that they show every Arsenal game really did mean that they would be opening up at breakfast time on a Sunday morning. To our immense surprise their swift response informed us that doors would be opening at 7:30am sharp! I bet there are few, if any, pubs anywhere in London that would do the same!

After a couple of days ‘acclimatising’, read: eating Gray’s Papaya hot dogs, exploring numerous bars and visiting Yankee Stadium and Madison Square Garden; we found ourselves riding the subway downtown at just after 7:00 am on Sunday morning. Upon arrival at the bar and to our utter amazement, not only was it open, we were far from the first Gooners to arrive, with all seats at the bar already taken.

We secured ourselves a table with a good view of a couple of the at least a dozen TV’s which took up most of the available wall space and settled in for breakfast. With menu choices including: Gunner Grilled Cheese, a Highbury Special Pulled Pork Wrap and an Emirates Burger and Heineken on special, it was apparent that the NYC Gooner family was used to breakfasting in this way.

As kick-off time approached more and more fans streamed in until the bar was pretty much full, with standing room only for the later arrivals. When the game got underway all eyes tuned into the match with just as intense a focus as any you would find in the most hardcore of Arsenal pubs in North London.

A group of Chilean lads congregated under one of the screens armed with genuine German beer steins, while disappointed that their idol Alexis was only on the bench, adopted the role of main ringleaders in the chanting and banter. The nature of this, although delivered with all the enthusiasm you would expect from our cousins across the pond, was noticeable by the slight differences in inflection of the chants and the terms employed in abusing the opposition players; we were implored by one of our new friends to ‘boo that man!’ every time former captain Fabregas touched the ball, whereas I suspect slightly more choice words may have been aimed at him from the away end at Stamford Bridge and in the pubs back home! Never before had the term ‘two nations separated by a common language’ seemed so apt!

After a shaky start, as is customary for Arsenal in these big away matches, the game settled into a fairly even contest with, for once, Arsenal, giving as good as they got and causing the Chelsea backline some problems, with ‘Sideshow Bob’ in particular, as our Chilean friends of course referred to David Luiz each time he intervened, proving frustratingly resistant.

Half-time came and went in a contest that was absorbing, if somewhat lacking in free-flowing football, then a quarter of an hour from time, Mustafi had the ball in the net sparking pandemonium around the bar, only for our celebrations to be prematurely  muted as the camera panned to the linesman’s raised flag. Three minutes before the end that man Sideshow Bob was shown a red card after a vicious and late challenge on Kolasinac, drawing much whooping and ironic cheering from all corners of the bar. Quite what the neighbours thought was going on at that time on a Sunday morning is anyone’s guess!

In the end we had to settle for a respectable goalless draw and the bar emptied as drinks were drained and those assembled headed off to their normal Sunday routines. Conversations between NYC-based fans and visiting Gooners drawn to the bar revealed that the Americans were genuinely interested to find out what we made of the atmosphere for the match. I have to say that while it felt more than slightly surreal to be drinking beer and watching the match at that time on a Sunday morning, it was a brilliant experience thanks to the enthusiasm, passion and genuine friendliness shown by the bar’s Gooner regulars. We promised ourselves that, probably even by deliberate design, it would be something that we would definitely be doing again next year. Plus of course, as the bouncer informed us all on the way out, we actually really won because we didn’t lose when all expected to- it is hard to argue with logic like that!