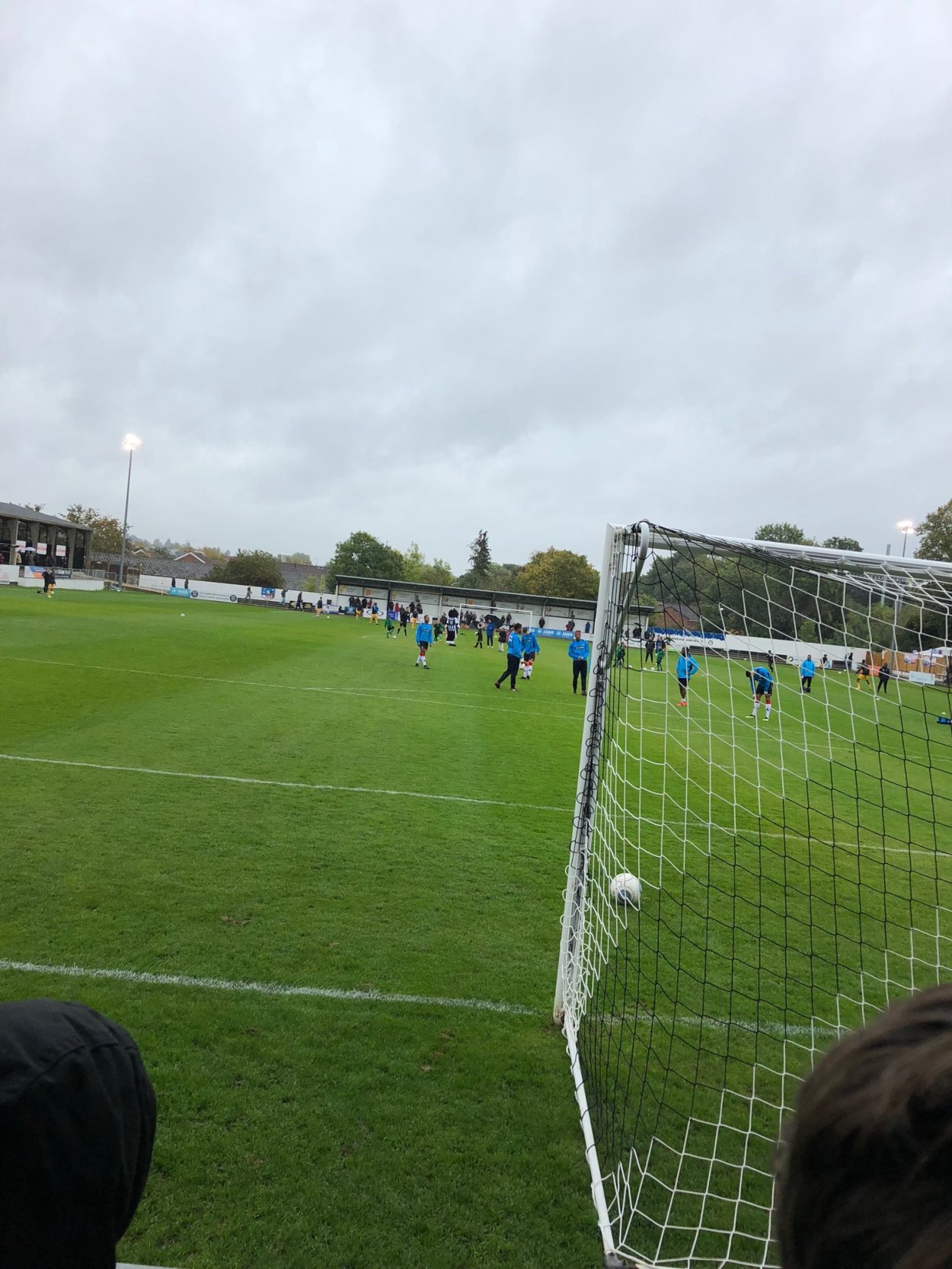 As has been chronicled on these pages over the last season and a half or so, Mrs Football Nerd and I have been becoming increasingly obsessed with all things Leyton Orient. So with an Arsenal-free Saturday and an Orient away game less than an hour on the train outside London, we couldn’t resist the opportunity to follow the O’s to Maidenhead for our first bona fide away-day.

The proximity of Maidenhead meant that it was a relatively civilised departure time for us which was entirely welcome since we had spent the previous evening at the Isle of Dogs’ very own annual Oktoberfest. Even though of course, as yours truly tends to suggest every year, German beer famously doesn’t give you a hangover; we armed ourselves with a four-pack of lager to stave off the fuzzy heads that we of course didn’t have, and settled onto the train.

Having not been organised enough to buy any food for the journey, the missus opened negotiations with a fellow O’s fan in the adjacent seats, attempting to swap the McDonald’s vouchers she had diligently brought with her for the Big Mac meal that he was enjoying. Rather unsurprisingly our new friend preferred his actual food to the promise of a discounted meal in the future. Oh well it was worth a try!

Approximately two and a half minutes after leaving Paddington, purely for superstition-based reasons of course, Mrs Football Nerd decided it was time for a couple of airings of adopted Orient anthem ‘Tijuana Taxi’ on her phone, which had the added impact of identifying another O’s fan sharing our carriage who, at his first game back in the 50’s, had incurred the wrath of his father by getting bored by Orient winning 8-0 against Crystal Palace, oh for those days now! The Orient and football-based chat between the four of us helped passed the journey along very pleasantly and we reached Maidenhead before we could even finish off our second beer!

With the weather being particularly grey, drizzly and grim and us still being hungry after our unsuccessful McDonald’s negotiations; we did what all fans on away-days do in these situations and headed for the nearest pub. To our immense pleasure we found that The Bell was not only practically across the road from the station and halfway to the ground but they were also serving food. We opted for a rather civilised sharing platter involving chicken wings, chorizo and croquettes and in need of a table number for ordering we asked some locals if they wouldn’t mind us sharing theirs; friendly as they were they had no problem with it, but seemed less enthused as their regular pub filled up with ever-increasing numbers of O’s fans. We could have almost been back in the Leyton Star!

Suitably refreshed and having watched Leeds draw with Brentford on the TV, we headed off to the ground. Due to the large number of visiting fans we had been allocated the Bell Lane terrace or the Bell End as we childishly joked. This is normally the home end but is given over to clubs with a large travelling support, much to the justifiable consternation of the home support. With hindsight we should have belted out a couple of choruses of: “we’re Leyton Orient … and we’ve taken your stand!” just to really wind them up.

Thankfully, given the weather, a fair section of the terrace is under cover and we were early enough to secure a spot behind the goal and most importantly under the roof. For those of us of a certain vintage the chance to actually stand on a terrace brings with it a certain sense of nostalgia for the way that things used to be, when football was really football.

As the teams emerged it dawned on us just how many travelling supporters were in the ground, the post-match figures confirmed it was a total of 923: almost half of the of the crowd of 2,016. There is a real feeling that this Orient team is resurgent this season and the atmosphere was one of optimism, even if it was slightly guarded after losing our unbeaten start to the season the previous weekend.

It was the O’s who started very much on the front foot with summer signing James Alabi, who my Tranmere Rovers-supporting mate Paul suggested was underwhelming (read utter s**t!) to say the least, during his time on the Wirral, was sent through on goal by captain Jobi McAnuff; in the end he was forced off the ball a little too easily for a big guy and then offside for Clay’s attempted return pass.

We didn’t have to wait long however, eleven minutes in that man McAnuff, who it has to be said has looked really up for it this season, found Macauley Bonne with a cross into the box and our top scorer made no mistake glancing a header into the bottom left hand corner for his tenth goal of the season. It is probably fair to say that Bonne hasn’t quite hit the heights of last season just yet, but you cannot argue with 10 goals in 15 appearances.

The early goal settled the nerves amongst those who had travelled from East London, and we could have doubled our lead a couple of minutes later when Alabi rolled an effort across the face of goal after being teed up by Bonne. Maidenhead still carried a threat and Big Marv had to be alert to clear a header off the line, before Alabi made amends on the half hour mark when he seized upon a loose ball in the box and calmly slotted home. Our mate Paul texted us with his incredulity that Alabi had scored for the second time this season, we laughed even more when we remembered we had sent Jake Caprice Tranmere’s way!

At half-time, happy with the way the first half had gone, we went in search of refreshment, to our amazement the ‘bar’ consisted of a garden shed with a couple of canopies you could purchase from your local DIY store! However any apprehension we had dissipated when we realised that the service was highly efficient and there was a choice of lager or two different real ales. We commented that Orient’s previous catering partners could have learned a thing or two from this seemingly makeshift facility!

Back in situ for kick-off, the second half proved to be more an exercise in control from Orient rather than a display of scintillating football; given the conditions and the two goal lead this was completely understandable. Big Marv, Josh Coulson and Mrs Football Nerd’s personal favourite, Joe Widdowson, in particular forming a solid rear-guard to largely keep the home side at bay. In the end it was a solid enough away performance and it was good to see the O’s get back to winning ways after tasting unwelcome defeat the previous week.

After the match we had to exit through the two turnstiles that we had come in through rather than through a larger exit gate, prompting the wags amongst us to suggest that they wanted us to pay on the way out as well! We headed straight back to The Bell with the intention of having a pint or two and letting the crowd clear on the trains back to London, unfortunately a sizeable proportion of the travelling support had had the same idea. Being the resourceful types we are, we opted to grab some refreshments from Sainsbury’s, jumped on the first train and headed back to London.

On the way back in conversation with an Orient-supporting couple who were more regular away game attendees, we concluded that as fantastic as it is to go to Brisbane Road on a regular basis, there is something even more thrilling about following your team away from home. In some way the travel and the unfamiliar surroundings, pre-match habits and routines make you bond more closely with your fellow fans. It almost feels, especially when you win, that you have invaded someone else’s territory and conquered it. The buzz is such that we are already desperately scanning the fixture list to see when we might be able to do it all again.

One thought on “The day we went to Maidenhead!”