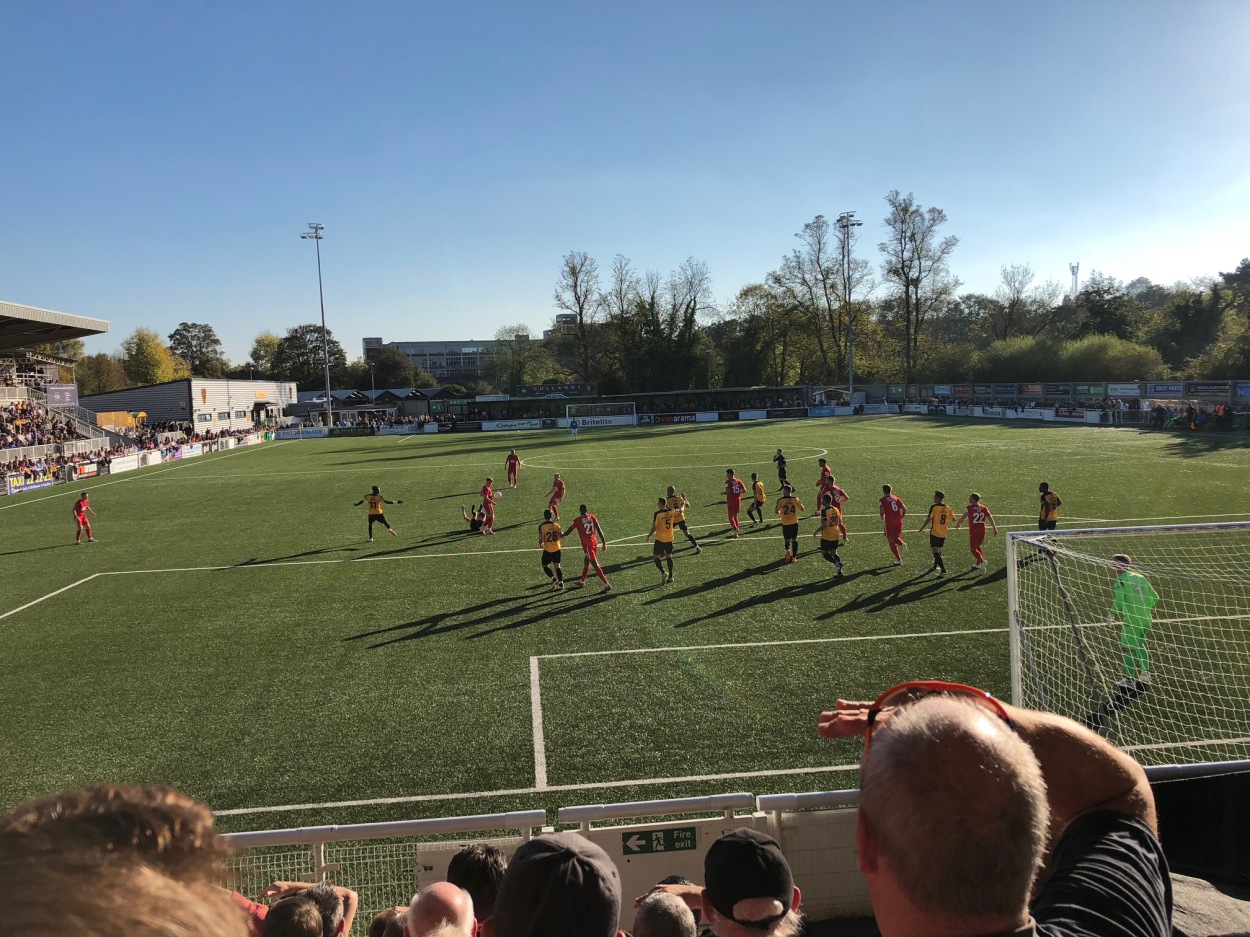 After the strange, vapid hinterland of another international break, this week has seen a relatively hectic return to football-watching form. It all started last Saturday when Mrs Football Nerd and I headed off to Maidstone for our second proper Leyton Orient away-day, to watch the O’s take on fellow National League side Maidstone United in the Fourth (and final) Qualifying Round of the FA Cup.

Such have been the levels of optimism (an unusual feeling for O’s fans as I am beginning to learn!) that have greeted Orient’s start to the season, coupled with the less than generous allocation of just 600 tickets, we genuinely feared that we wouldn’t be able to get to this one: assessing that if 923 fans could make a journey of comparable distance to Maidenhead, then surely all available tickets would be snaffled up by season ticketholders.

Much to our amazement, as we both logged into our respective ticket accounts at precisely 9:30am on the Wednesday before the match: the exact moment that any remaining tickets were to go on General Sale, we both found we had the option of buying two tickets. After a hectic exchange of text messages, to ensure we didn’t over-order, we were sorted.

Setting off on the morning of the match, it dawned on us that London Victoria was going to be filled with protestors congregating for the People’s Vote march seeking a referendum on the final Brexit deal. This combined with the fact that Chelsea were hosting Manchester United in the lunchtime kick-off made for some surreal sights as we played an impromptu game of ‘guess the EU-Remainer or football fan’ as we sipped a pre-train pint outside the Shakespeare pub that overlooks the entrance to the station.

Armed with our refreshments for the journey, (read cans of lager and two packets of hog roast crisps!) we boarded our train and headed off to see what delights Maidstone had to offer.

Upon arrival, we eschewed the option of going to the Wetherspoon’s next door to the station, as we quite fancied catching some of the Chelsea-United game. Reckoning that with the ground once again no more than a five minute walk away, there must be a suitable hostelry en route showing the match.

Our joy in locating the Dragoon, complete with sign advertising the fact that they showed live sport, just a couple of minutes up the road, soon evaporated as we walked through the doors to find that this meant horse racing for the pub’s regulars and not apparently Premier League football. Each to their own I guess! After some further enquiries amongst the locals, it transpired that the other pub which we had originally been aiming for was unlikely to be showing the match either, so we opted to settle in for a pre-match pint or two and look up the score on our phones.

Just as we got stuck into our pints and continued chatting to our new friends, the door opened and in walked a familiar face, it was the same fella we had tried to negotiate with to trade his McDonald’s meal for our vouchers on the way to Maidenhead two weeks previously (https://football-nerd.org/2018/10/12/the-day-we-went-to-maidenhead/).

Dave (as he is actually named) recognised us, (how could he not?) and joined us for a beer with another travelling fan, Andy, who was utterly flummoxed by the lack of contactless card facilities in the pub. In many ways while we were only about forty miles outside London it felt way further than that!

After a couple of pints and a chat with our new mates, Dave, the missus and I headed off to get ourselves into the ground and get a decent spot while Andy waited for his mates to turn up with his ticket.

Maidstone’s home, the Gallagher Stadium, is a fairly new ground having only been opened in 2012, and it is hard to argue with the quality of the facilities, save for the solitary port-a-loo that seemed to serve the entire away end. However, we couldn’t help but feel that it lacked something in comparison to the nostalgic surroundings of York Road, Maidenhead the fortnight previously; or indeed to the East Stand at Brisbane Road, with the reported danger of the floor giving way beneath your feet! It is a strange quirk of football fans in that the more modern something is, the less we like it. The plastic pitch and organised terrace space allocation did nothing to endear us to it any further.

O’s manager Justin Edinburgh had opted for a bit of squad rotation going into this one, seemingly prioritising the League, or more specifically escape from it, over an extended cup run. So in came Happe, Lawless, Gorman and Harrold and a switch to a three centre-back system.

Whether the changes to the squad and formation inveigled the players’ minds or not we will never know, but they just didn’t seem up for it, perhaps guilty of feeling that the match didn’t carry the same weight of importance as the bread and butter of a league match. Whatever the reasons, the performance was below the standards set so far this season and we had to admit, albeit begrudgingly, that Maidstone were full value for their victory.

It would be easy to become frustrated that after such a good start to the campaign, an opportunity for a cup run has been jettisoned. However if the O’s can secure victory at home to Havant & Waterlooville on Saturday and continue their good start to the league campaign, as well as having the chance for a weekend off for the First Round Proper, in the end elimination may prove to be something of a blessing in disguise. That is what we told ourselves to cheer ourselves up on the way home anyway!

One thought on “Football Nerd Weekly Ramblings – Back into the swing of football-watching. Part 1: Another Orient Away Day.”