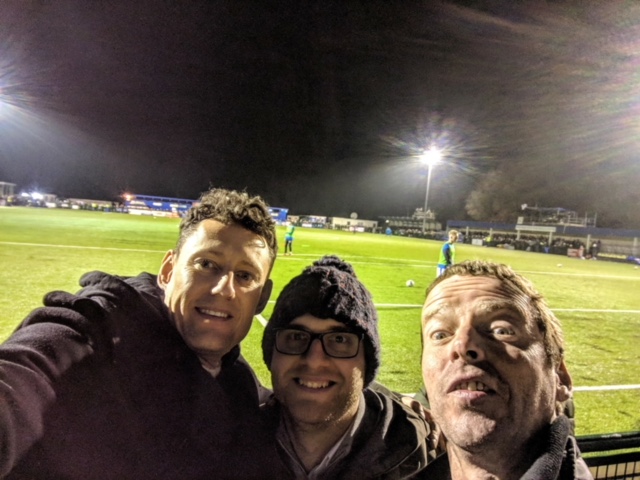 Perhaps one of the more disturbing facets of being a football obsessive is the inability to be able to say no to going to a match, any match. So it was to prove for me once again last week. While the missus and I were on our recent holiday in Istanbul, my Tranmere Rovers diehard of a mate, Paul, who has featured on these pages previously, sent me a message asking me if I fancied a trip to Oxford for the FA Cup First Round Replay, Rovers having conspired to draw the original tie 3-3, a late Norwood goal saving their blushes against their sixth tier opponents.

I don’t even really know why I pretended any differently, I briefly ummed and ahhed or at least went through the motions of doing so, but deep down I knew that I was going. This wasn’t even the (slightly) more famous Oxford United, this was Oxford City a team who has spent its entire history in non-league and whose only real achievements having been appointing Bobby Moore as manager for a brief spell back in the early eighties, and reaching the second round of the FA Cup twice in their history, the second occasion being just last season. Why wouldn’t we want to go?

So it was that Paul, Glenn an Australian mate who had been at the World Cup with us, and I met up at Marylebone station ready for our journey into the deepest tiers of the English football pyramid. Unfortunately another associate random football watcher Joe the Chef wasn’t able to make the trip due to work commitments; we only half-jokingly questioned how anyone could let work get in the way of the trip of a football-watching lifetime like this?

After doing what travelling football fans the world over do and buying some beers for the journey we boarded our train, chuffed with ourselves that we managed to secure a table on a busy commuter train, the lady who had to share our table with us due to the lack of other seating options however looked less impressed.

To the immense relief of Glenn and me, having seen first-hand in Russia over the summer how many times the guy needs to eat, Paul had come prepared with a full array of snacks to keep him going on the seventy minute journey to Oxford. As our journey progressed the realisation hit us that with this being an FA Cup Replay if Rovers made a mess of this game we could be facing the very real prospect of extra time and possibly even penalties; which could well result in a night in a budget hotel in Oxford and a lot of explaining to do to our work and other halves. We decided not to worry about that at this stage; surely Rovers would do the business, wouldn’t they?

Thanks to the beers and the chat the time slipped by nice and easily and we were in Oxford before we knew it, in fact before we could even finish of our beers. As we assumed that public transport might be somewhat limited for the 2,000 capacity Marsh Lane ground we jumped in a cab outside the station, amazingly the driver didn’t seem to realise there was such a high profile FA Cup fixture taking place, and we needed to reinforce our destination to him to make sure we ended up at the right place. The ground is quite literally almost in the middle of nowhere so we took the precaution of pre-booking the same guy for our return journey, anticipating that passing cabs would be somewhat scarce after the match.

Having carried out extensive research of the ground, which consisted of yours truly having read the Football Ground Guide entry and Paul having looked up the Tranmere Twitter feed, we were mightily relieved to find that the facilities in the nominated away end catered for the two essential requirements of travelling football fans by having both a beer tent and a burger van. We of course made straight for the former which not only served a choice of lager or ale but also had TV facilities in the form of someone’s Ipad on a stack of empty beer crates. Even with such luxury it felt a long way away from the last time the three of us had watched a football match together: Brazil v Costa Rica in St Petersburg back in the summer (https://football-nerd.org/2018/07/19/four-go-on-a-russian-world-cup-adventure-part-3-st-petersburg-wednesday-20th-june-to-friday-22nd-june-2018/).

After a quick beer we headed out onto the terrace and sampled the catering, we were surprised to find that the fare on offer was passable, as Glenn put it: it might not have been the best burger he had ever eaten but he wasn’t completely averse to having another one later on, clearly he had spent too much time hanging round with Paul!

Considering the wet, cold and miserable weather and the fact that the game was live on TV, the 200 plus Rovers fans who had made their way to Oxford on a Tuesday night was a highly impressive turnout. We certainly seemed to make more noise than the 1,000 or so home fans who seemed strangely subdued and unmoved by having a bona fide League club in town and the potential for a cup upset.

Rovers made fairly easy work of the game with Norwood opening the scoring just six minutes in and Mullin securing the win on the half hour mark. At half time we repaired back to the beer tent where the staff had been busily pouring pints ready for the rush to descend upon them. From the number that still remained untouched on the bar as the second half was about to get underway they had perhaps not factored in the weather and that a lot of the travelling support had driven down in their assessment of potential demand. Amazingly our cheeky offer to take them off their hands for free was rejected.

The second half was largely academic, so much so that Glenn, being of an architectural background, took himself off on a safety assessment tour of the ground just as he had in St Petersburg; Paul and I were relieved when he reported back that he had no majorly pressing concerns unlike at the multi-million dollar Krestovsky Stadium. I spent most of the half mocking former Orient fullback, Jake Caprice, now of Rovers, although to be fair he looked to be a much better, or indeed completely different, player than I had remembered from his time at Brisbane Road.

After the match, true to our driver’s previous assurances, our cab was there waiting for us and with a bit of a sprint through the station we just made the 10:01 train, so we were safe from spending the night in Oxford. About half way through our journey back to Paddington a clutch of glum-faced Sutton United fans boarded at Slough after having seen their team eliminated on penalties; there but for the grace of the football gods…

After Glenn and I bid farewell to Paul, we couldn’t help but wonder where we would end up next on our football-watching adventures, with Rovers hosting Southport in the second round  this weekend surely there is no way he could convince us that we want to go to Southport if there is a replay, could he?