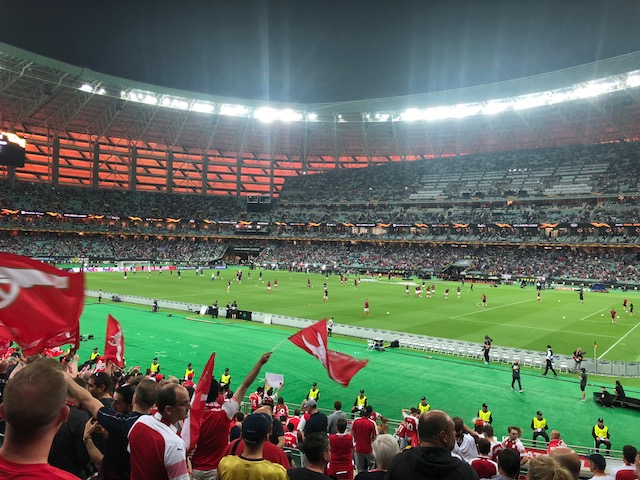 There aren’t many times in my life when a 2:35am alarm is greeted with excitement, but as I got myself up and ready I knew the next 24 hours plus was going to be the maddest and most surreal thing I had ever done in the name of football.

Amazingly I was not alone as despite the cost, distance and general inconvenience Arsenal had somehow managed to fill two planes with people foolish obsessed enough to undertake a 5,000 mile round trip to watch our team play a European Final. Perhaps most tellingly none of us could come up with any genuine reason why we wouldn’t go!

As I boarded the flight to my amazement I bumped into a familiar face from the 49ers bar at the Emirates, Mark, who like me had let his inability to use common sense in matters of Arsenal-watching guide him, and against his better judgement had found himself booking himself onto this most insane of daytrips when a mate of his had asked him and his daughter Robin if they fancied taking up a pair of spare tickets on the proviso that they went with his son Ryan, still permitted to go despite his nan’s funeral being scheduled for the following day.

Enter Air may allegedly be Poland’s third biggest airline with a fleet, if you can call it that(!), comprising a supposed total of three aircraft, but this was not the business class luxury that an air fare of just under a grand would normally bring, somehow though that merely added to the sense of adventure.

After a very much unneeded hour and a half wait on the tarmac as an issue to the air bridge was remedied and a ‘brief’ hop, at least in terms of world travel if not football away days, of five hours and twenty minutes, we touched down in Azerbaijan.

Outside the airport a line of buses was on hand to take us down to the stadium where we could either wait or catch a shuttle bus into town to the official Arsenal fan meeting point at the intriguing sounding Winter Gardens. Given even though it was approaching 6:30pm local time, there was still four and a half hours to go until kick off, we decided we might as well go and check it out rather than ‘enjoy’ the stadium ‘food court’ which seemed to consist of a small refreshment tent and a row of port-a-loos.

As nice a setting as the Winter Gardens is, fan park as a description of the facilities laid on for us would be stretching it somewhat as three similar tents to the one at the stadium and one public toilet were the sum total of the delights to explore. There were a couple of café bars with outdoor seating so we settled in for a bit. After a brief negotiation with our waiter it became apparent that this particular hostelry didn’t sell beer, although ever-prepared Mark and Ryan had armed themselves with a couple of half bottles of duty free brandy to add to our Cokes to accompany our just about passable chicken burgers.

The Arsenal fans milling around the place were an eclectic mix drawn from the Far East, the Gulf States, Russia and Eastern Europe, their chants were either mispronounced versions of ours or their own compositions in a language that we couldn’t decipher. There is a whole debate to be had about what makes a true fan, but the whole experience was so far beyond normal that it was difficult to know what to make of it. It was certainly different to anything you would expect in a more traditional European final.

After nearly being charged the equivalent of almost a tenner for two paper cups of instant coffee, we decided that we had had enough of being fleeced and set off on a bit of stroll round the immediate locale. Perhaps the most accurate description of the centre of town would be that it is similar to Istanbul but with remnants of the old Soviet era in some of its architecture and a large dose of the petro-dollar bling of somewhere like Dubai. None of the four of us were really sure if we liked it or not and it didn’t really feel like we were there for a major football match.

Having not had a beer since Stansted and the lack of any suitable looking venues around us, we decided we might as well head back to the stadium to have a pre-match pint there as surely even a place as remote as this would be serving beer at the ground, especially given Amstel’s sponsorship of the tournament.

As is often the way with relatively recently built stadiums outside of traditional city centres, there was nothing other than car parks and motorways around the ground and the ‘food court’ was only just kicking into action as the guys in the beer tent were opening up a few boxes of beers to stick the contents in the one fridge, we felt our best option was to go inside.

After a frustratingly difficult conversation about what size of bag was too large and what could be taken in, which saw yours truly being sent to left luggage along with Mark with his normal sized rucksack, only to be sent back from there having been told it was too small to store and I should take it in with me!

When we finally got inside it soon became apparent that even though there were bars and refreshment kiosks, they had seriously underestimated how thirsty 3,700 travelling Gooners would be. In fairness there seemed to be a sufficient supply of actual cans, but the overly drawn out process for getting the contents into a plastic cup and taking payment took way longer than it needed to. God alone knows how they would have coped if we had sold our full 6,000 allocation or if the airport could have actually accommodated a proper contingent of support!

Anyone who has visited a stadium that doubles as an athletics track will know how far away the pitch can seem, thankfully for us our block was on the corner level with the touch line so our view wasn’t terrible, certainly those sitting behind the goal might have found London’s Olympic Stadium positively cosy in comparison.

Allocating the travelling supporters two corner sections seemed another affront from the organisers to those of us travelling from the UK, a fact hammered home by a feeling of us being backstage once the pre-match entertainment kicked in, although the sound was so terrible it was difficult to decipher whether we were missing out. The rest of the ground was a mix of locals, the aforementioned fans from large TV and commercially lucrative markets, those on a corporate tip as well as plenty of empty seats.

Without wanting to rake over old ground (https://football-nerd.org/2019/05/24/football-nerd-weekly-ramblings-all-the-way-to-baku-wtf/) it was abundantly clear who the target market was for this game was (clue: it wasn’t the season ticket holders of the participating clubs!), however in ignoring the real fans UEFA seemingly shot themselves in the foot. What real supporters bring is the atmosphere, colour and sense of occasion, all of which was destroyed in one fell swoop. It didn’t feel like a cup final, it felt like being at one of those money-driven pre-season tours of Asia, the States or Australia that are so popular these days. A clear indication of where football is going and it is as frightening as it is seemingly inevitable.

Arsenal started the match pretty well and looked comfortable, if not too threatening, for the first 25-30 mins save for a drive from Xhaka that clipped the crossbar. From there though Chelsea got themselves back into the game, Eden Hazard worryingly growing in prevalence in what Chelsea did as an attacking force.

At half-time we still had hope, however that was to last a mere matter of minutes into the second half until Olivier Giroud (of course it bloody was, because that is how football fate works!) beat our former Chelsea goalkeeper, Petr Cech, with a low diving header. Sixteen minutes later Pedro had opened us up again and Hazard had converted a penalty and that familiar sinking feeling hit us that is was over, that all that was left for us was the long, depressing journey back home.

The much-maligned Alex Iwobi, on as sub, pulled one back with a quality strike that may have surprised him as much as us, but any flickering sense of optimism was quashed almost immediately when Hazard made it 4-1.

Late on Unai Emery, out of ideas, brought on young midfielder Joe Willock for Mesut Özil, the boos that rang out amongst the Arsenal support as the mercurial German playmaker ambled off the pitch, a clear indication of patience having run out. The fact that Willock did more in his ten minutes on the pitch a further indictment. Surely there can be no future for Özil at the club, although the £350K a week salary may make it hard to find very many, if any, suitors.

What this means for Arsenal and how far the club has fallen is a discussion for another day but defeat to a Chelsea team that are not majorly impressive themselves was a sobering reality check.

Significantly our billionaire owner Stan Kroenke opted not to attend the final, so anyone hoping he may finally give enough of a sh*t to invest some of his own money is frankly deluding themselves. From what they used to be just fifteen years ago, the club are now a shadow of themselves and going backwards. Back at the airport after the unaided endeavour of finding the correct coaches, we saw Bob Wilson and Pat Rice and then later met Ray Parlour in the bar, a reminder of how things used to be and why we fell in love with the club in the first place.

To rub salt into the wounds our flight was delayed from 3:40am until 6 as the flight crew were inexcusably late returning to the plane, but as it always seems to do in these kind of situations, that ‘blitz spirit’ kicked in and despite having had no sleep for more than 24 hours the banter and laughs kept us all going.

At the end of it all, as I had a much-needed shower and flopped onto the sofa, I reflected on my experience, despite the delays and the disappointment I enjoyed every single minute of it. The selection of venue was inexcusably wrong and Arsenal’s performance was woeful, but if I had the chance to do it all again I would do so at the drop of a hat!

4 thoughts on “One Night in Baku: a daytrip to watch Arsenal in a European Final.”