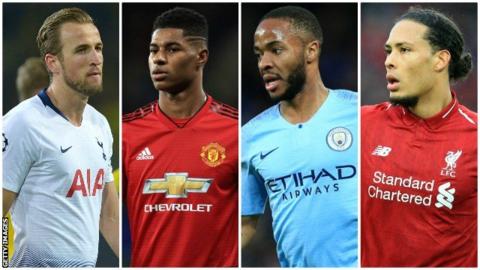 So another weekend passes and another win each for Manchester City and Liverpool and still no decisive move in the race for the Premier League title. First up on Saturday evening Manchester City made light work of Watford thanks to a thirteen minute hat-trick from Raheem Sterling. On Sunday Jürgen Klopp’s Liverpool responded to the pressure and saw off Burnley, albeit after a couple of fleeting moments of concern for the Anfield faithful.

With the stasis being maintained in the title race all attention switched back to Europe in midweek with the top two Premier League teams securing passage to the quarter finals of the Champions League, both defeating German opposition. City demolished Schalke 7-0 on the night and 10-2 on aggregate without necessarily having to hit top gear. Liverpool despite uncharacteristically not scoring in the first leg notched three vital away goals in the Allianz Arena to eliminate the once-revered Bayern Munich.

The wins for City and Liverpool ensured that all four English participants took their place in the draw for the quarter finals for the first time in ten years; although admittedly some of that may be explained by Arsenal’s perennial elimination at the first knockout stage groundhog season after groundhog season!

Back in the heady days of the mid 2000’s, at least one English team featured in the Final itself for five consecutive years between 2005 and 2009. Then in 2013 as Bayern Munich and Borussia Dortmund did battle at our very own Wembley Stadium we were told that the era of English dominance was over, that with none of the English clubs even making the quarter finals that Germany and Spain were the new powerbases of European football, thanks to more sophisticated tactical thinking and approaches. It was also suggested that the increased competitiveness and cut and thrust nature of our football inhibited our clubs on the very highest stage.

Surprisingly the predicted period of German dominance never truly came to pass, despite Bayern’s replacement of treble-winning Jupp Heynckes with Catalan uber-coach Pep Guardiola. Spanish clubs however certainly stepped into the void with three La Liga participants featuring in the last eight for each of the past five seasons. They also gave us two Madrid derbies in the final itself and Barcelona in 2015 being the only team to prevent Real Madrid winning five straight titles.

This time around Real’s reign was brought to an ignominious conclusion as they were sent crashing out of the competition by Ajax, while Atletico were undone by a  hat-trick in controversial circumstances from a familiar foe now plying his trade in Turin, one Cristiano Ronaldo, leaving Barcelona as the only Spanish club standing.

In Europe’s secondary competition the Europa League, Chelsea eased into the last eight beating Zenit St Petersburg 8-0 on aggregate, whilst Unai Emery’s Arsenal once again had to undo the damage of a first leg defeat before eventually securing their place in the draw.

However is any of this really a surprise? To all logical intents and purposes the ‘Big Six’ clubs of the Premier League should be reaching the latter stages of the European competitions given the staggering financial resources at their disposal, the proliferation of talent that they share both on the pitch and in the dugout, and the level of competition that drives them on to evolve and develop season after season. In fact could it not be argued that, Liverpool’s appearance in the final last season aside, they have actually underachieved?

With English clubs making up half of the Champions League quarter final draw it was always likely that two of them would be paired together and so it is Tottenham and Manchester City who will meet to determine which of the quartet definitely won’t be progressing to the semi-final. On the face of it Liverpool would seem to have been handed the potentially easier task in comparison to their perennial rivals from the other end of the East Lancs Road, being drawn against Porto while Manchester United will face treble-chasing Barcelona.

In the Europa League and despite my utter conviction to the contrary, Arsenal and Chelsea were kept apart in both the quarter finals and, should they both progress, the semi-finals. Arsenal face the trickier route to a potential final with first Napoli and then Villarreal / Valencia barring their way, whereas Chelsea, assuming they overcome Slavia Prague, will play either Benfica or Eintracht Frankfurt for a place in Baku.

Predicting these types of ties is never a precise science and requires an element of guided guesstimation, however would anyone be truly surprised if both European finals turned out to be all-Premier League affairs? If that were to happen maybe we could truly begin to anticipate another period of domination of the European scene by English clubs. Brexit it seems doesn’t necessarily apply to our football teams!