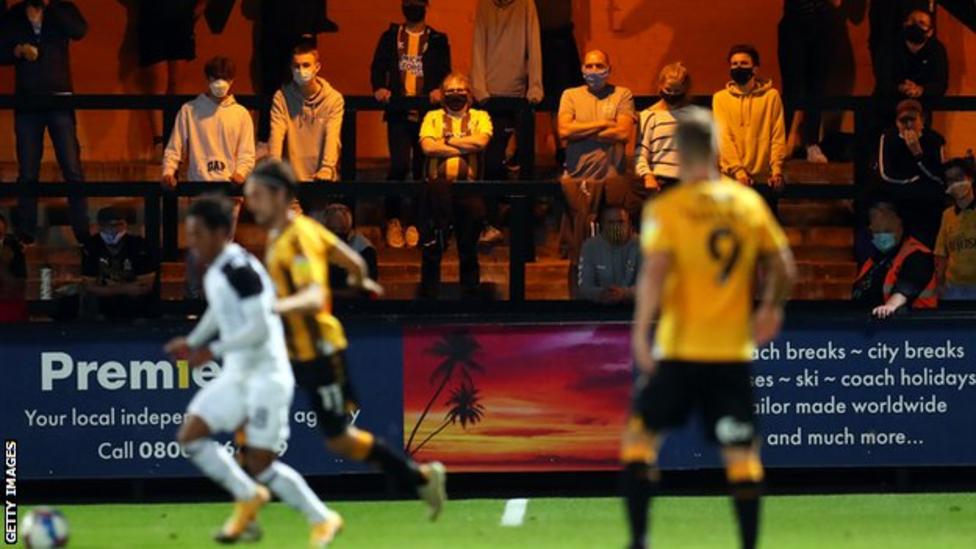 So football’s back once again, but as yet we still have some weeks to wait before we can even countenance a return for fans even in limited numbers, although in an encouraging move the English Football League (EFL) has been permitted to allow the return of up to 1,000 fans into pilot matches starting from this weekend. In a somewhat rushed expression of interest process, clubs from the Championship, League One and League Two were invited to request permission to host one of these trial matches by Tuesday of this week.

It has now been confirmed that nine matches will be allowed to go ahead with fans in the ground, two in the Championship, four in League One and three in League Two, it would have been ten but for Luton Town pulling out citing not having sufficient time to prepare. Sadly, for Mrs Football Nerd and I, Leyton Orient’s home league opener against Mansfield Town wasn’t selected, so it is a case of continuing to watch on the club’s live stream, at least for now.

While it is an undoubtedly welcome, if relatively small, step back towards some form of normality for football fans, it still feels like we are a very long way from where we left off back in March. The continuing rise in Coronavirus cases here in the UK, means that test events are to be limited to a maximum of 1,000 spectators, but it has also thrown the plans for grounds to be up to a third full from the beginning of October up in the air as the potential to do so is now under review. I am not a betting man by any means, but if I were to go out on a limb here, I might suggest that at best permission for that many supporters being allowed into stadia is likely to be pushed back a month or two at best.

The loss of matchday income across football as a result of the continuing lockout has been well-documented, with the Premier League writing to the Government last week stating: “For each month of the season without fans, more than £100m is lost to football across the leagues, with consequent damage to the local and national economy. It also harms the employment prospects of more than 100,000 people whose jobs depend on matchday activities.” Obviously, as the Premier League missive goes on to affirm, it is absolutely critical that football clubs are able to get fans back into grounds as quickly as possible, otherwise the financial impact is likely to be catastrophic. However, are we just kidding ourselves that it is likely to happen in any significant way any time soon?

Across the last couple of weeks or so the rise in the number of people testing positive in the UK has led to the introduction of the ‘Rule of Six’ law which limits the capacity of social gatherings to a maximum of six people, the apparent intention being to try and avoid another national lockdown. At the same time, we have seen the tightening of restrictions in certain areas where the infection rate is rising significantly, with more than 30 towns, cities and areas now subject to local lockdowns. It has been suggested that almost 10 million people, or 1 in 7, in Britain are now subject to these restrictions, with a number of other areas such as Merseyside, Lancashire, the Midlands, Yorkshire and some London boroughs teetering on the brink of joining them. Hardly the ideal conditions to get people travelling to or entering football grounds in the very near future!

Of course Prime Minister Boris Johnson and Health Secretary, Matt Hancock, continue to tell us that they are doing their utmost to ensure that they don’t have to enforce a second national lockdown, although the latter did do some speedy back-tracking on BBC News this morning accepting that the situation was “very serious” and that the prospect of UK-wide lockdown measures was possible. Even if we don’t reach the point of an official national lockdown, the way the list of local restrictions is growing we might actually have one by default. Such a situation would have significant implications for the sport we all love.

Survival through the pandemic for football and football clubs thus far has been predicated on the hope that things would go back to normal at some point this season, the earlier the better, with income streams recovering as more and more fans are allowed into stadiums, but what if that doesn’t prove possible? What if we have to go through the entire campaign with matches played behind closed doors? Or worse still, what if the pandemic forces another suspension of football and other sports?

While a finite period is (just about) survivable, a longer-term future without matchday income, and presumably reduced payments from broadcasters given they can point to the dilution of the product without the atmosphere that fans generate, would be seismic.

In many ways the return of football after the hiatus was something of a special case, in the words of Foreign Secretary Dominic Raab to: “lift the spirits of the nation”, and to a certain extent it has achieved that by giving us a focus beyond the horrible and frankly frightening things that are happening all around us in our new daily life. So while there is an incredibly strong desire for football and other sports to carry on, should the leagues and their clubs be starting to think about planning for a future without matchday punters, to adapt their operation in order to survive in the future?

Of course, deprived of the opportunity to follow our clubs in person, we have all had to adjust to watching on television or an Internet stream.  With broadcasters (reluctantly it has to be said!) finally being coerced into screening all Premier League matches in September, and the EFL having developed a flexible framework whereby all matches across all three tiers will either be broadcast live or available for streaming on iFollow or a club equivalent service, has helped to an extent, it remains unclear as to whether these arrangements can and will continue from October.

Having been following Arsenal on TV and Orient on their club stream since the start of the season, is no substitute for actually being able to attend the matches, but it does carry with it the relatively small consolation, especially in the case of the O’s, of being able to watch matches that I may not have been able to attend previously. These arrangements also mean that for the first time since the introduction of live football on TV in England, that games can be screened at 3pm on a Saturday. Might clubs in the lower leagues therefore consider digital season tickets for fans beyond their traditional average attendances and traditional catchment areas/ in other countries? That of course could never match the usual matchday income but does provide some form of revenue stream.

If clubs are going to face the stark reality of limited, or even no, matchday revenue for the foreseeable future then the only way they can adapt their operational model is to reduce their expenditure in line with their reduced income. To not do so would be tantamount to financial suicide. Already we have seen the agreement of salary caps for Leagues One and Two as well as limits on the number of players that can be retained. Might this have to go further, might player wages have to be negotiated down, even at the highest level, to reflect the change in the football market? If the loss of income suggested by the Premier League is borne out, we may even see a change at the uber-rich level at the very top of the game.

Below even the EFL and the National League, lower level non-league clubs are waging a campaign – #LetFansIn – to urge the Government to allow fans back into grounds as their gate and refreshment takings make up the bulk of their income, especially given the fact that crowds tend to number in their hundreds rather than thousands. Surely if any leisure activity is capable of maintaining effective social-distancing it has to be grassroots football? Certainly, it would seem to be safer than going to a cinema, a shopping centre or a pub/ restaurant. If the Government do relent on this (and I would urge anyone reading to sign the petition- https://www.change.org/p/the-government-to-see-the-return-of-non-league-football-letfansin), then maybe that is the future for us hopeless football obsessives desperate for our fix of live match action to go and support our local non-league side: football as we remember it.

3 thoughts on “Football Nerd Weekly Ramblings: Should football now start to think about adapting to survive?”