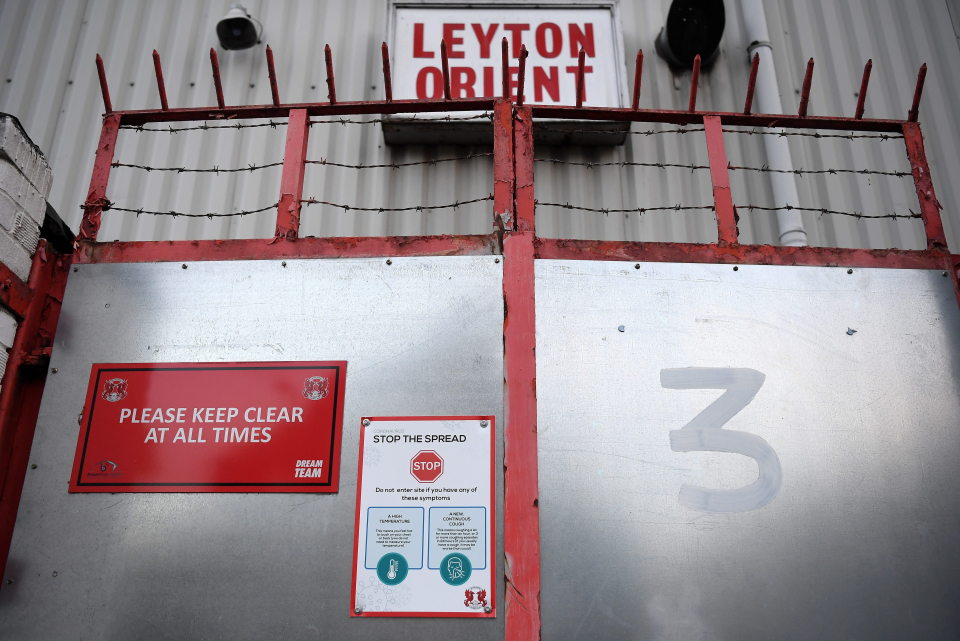 Increasingly during the ongoing and now worsening Coronavirus pandemic, every time I sit down to write about football it has to involve more and more consideration and thought to the impact of the subsequent lockdown and the restriction on fans being able to attend matches on the future of the game. Last week I reflected on how football might need to change and adapt in order to survive (Football Nerd Weekly Ramblings: Should football now start to think about adapting to survive?). This week I find myself reflecting on two further announcements that will have an undoubted impact on not just our own football watching lives, but also potentially the very future of the game as we know it.

First up came the announcement on Monday that a significant number of Leyton Orient (it had to be Orient didn’t it?) players had returned positive results in Covid-19 testing after the 2-2 draw at home to Mansfield on Saturday. Although somewhat bafflingly this wasn’t part of the protocols set down by the English Football League (EFL), instead the only reason that the Orient players were tested at all was because upcoming Carabao Cup Third Round opponents, Tottenham, wanted some reassurance ahead of the match and paid for the whole Orient first team squad to be tested. Quite how the EFL reached the conclusion that testing needn’t be mandatory and that they were seemingly content to insist on stringent hygiene measures and workplace social-distancing seems to be beyond the logic of the times in which we find ourselves.

The decision over whether the game should be postponed to be rescheduled, or whether it should be cancelled with Tottenham awarded passage to the next round in line with competition rules has been a great source of great consternation, especially as Orient were adamant that they had a team, presumably the youth team, available to at least fulfil the fixture.  After battling hard to try and convince the EFL of the case for rescheduling, Orient’s owner Nigel Travis has now seemingly admitted defeat and the club look set to miss out on the £150,000 they would have picked up for Sky Sports screening the game.

While rumours that Tottenham chairman Daniel Levy had offered to cover that loss proved wide of the mark, the highly generous solidarity of Spurs fans who have apparently spent in excess of £50,000 in the Orient online store, and virtually cleaned it out of stock, in order to donate replica jerseys to children at Whipps Cross Hospital and Haven House Children’s Hospice – two of the club’s partners from Tottenham striker Harry Kane’s front of shirt sponsorship; highlights that the unity of the football family remains very much alive and well during these tough times.

The pill of not being able to host Orient’s biggest game for a number of years was made even more bitter to swallow, when it emerged just a matter of hours later that West Ham’s David Moyes, Issa Diop and Josh Cullen were forced to leave the London Stadium just hours before the kick-off of their match against Hull City, after testing positive for Covid-19, yet that game was allowed carry on. Worse still, it seems that Hull turned down West Ham’s offer of tests and Brentford declined a similar offer before going on to eliminate West Brom on penalties. How can the EFL possibly claim to have maintained the integrity of the competition when a team is not allowed to play a game for trying to do the right thing, and another progresses to the next round without knowing whether the players are putting themselves and others at risk?

Perhaps the real reason for not sanctioning a rearrangement was the incredibly congested nature of this season’s condensed football calendar which necessitates the first four rounds of the League Cup being completed within the month of September. Perhaps a better option would have been to scrap the competition at least for this season if not completely, I doubt there would be too many people who would lament its loss, especially not a certain José Mourinho who has already described Tottenham’s early season schedule as “a total joke”.

Quite how the Orient players contracted the virus in the first place is as yet unclear, although the fact that less than a fortnight ago they played their opening league game in identified Coronavirus hotspot, Oldham, is something that shouldn’t necessarily be ruled out. Given the situation in which we find ourselves with the increase in the number of Coronavirus cases continuing to surge, this will not be the first and only fixture that will be impacted by a number of positive tests, assuming of course the EFL actually insist on mandatory testing. In fact, the plans for playing out the season at this juncture look wildly optimistic at best.

On the very same day, Prime Minister Boris Johnson informed us what we all suspected anyway, that the plans for some fans to return to watch live sport events in England from 1st of October will not now go ahead. While it was hardly unexpected given the continuing rise in Coronavirus cases, it does nothing but build on the fears for the future of football, and all sports, below the rarefied elite. Even those at the very top level, in football’s case the Premier League, are hoping for some form of support from the Government.

The Government has intimated that the pause on the return of crowds to stadiums could last through the winter and even up to the start of April, and the Department for Digital, Culture, Media and Sports (DCMS) is apparently drawing up rescue plans for as many as eight sports. It is not yet clear what support this package may include but is likely to be made up of grants and/ or loans. In addition to Government funding, Culture Secretary Oliver Dowden made it clear to the Premier League and other more financially stable organisations that they must do their bit by also helping clubs lower down the pyramid, a thinly veiled threat suggestion that football will need to sort itself out rather than hang on for a Government bailout.

Last week’s post on these pages brought some interesting input from fellow Orient fans (with thanks to Phil, Jim and Gerrard for your insightful thoughts and comments), the broad consensus of which was that there was more than enough money in football to weather this ongoing crisis except so much of it is wasted on over-inflated wages, transfer fees, agent costs etc. and that some kind of reset was needed in which a less TV broadcaster-driven and more club-focused approach was needed, if things are ever to get back to some kind of normality. Breaking away from the TV deals, at least in the lower leagues, and being allowed to charge for streams home and away, even if fans are allowed back into the grounds seems like a sound strategy for clubs to secure their own income from both subscription fees and advertising.

The challenges for football are therefore clear: firstly, to try to survive the current situation and then to look at how we build a better and more equitable game. It sounds relatively straightforward when you put it like that, however football’s track record, at least since 1992, suggests that putting greed and self-interest to one side is not something that clubs in this country, especially at the top levels, are particularly good at!