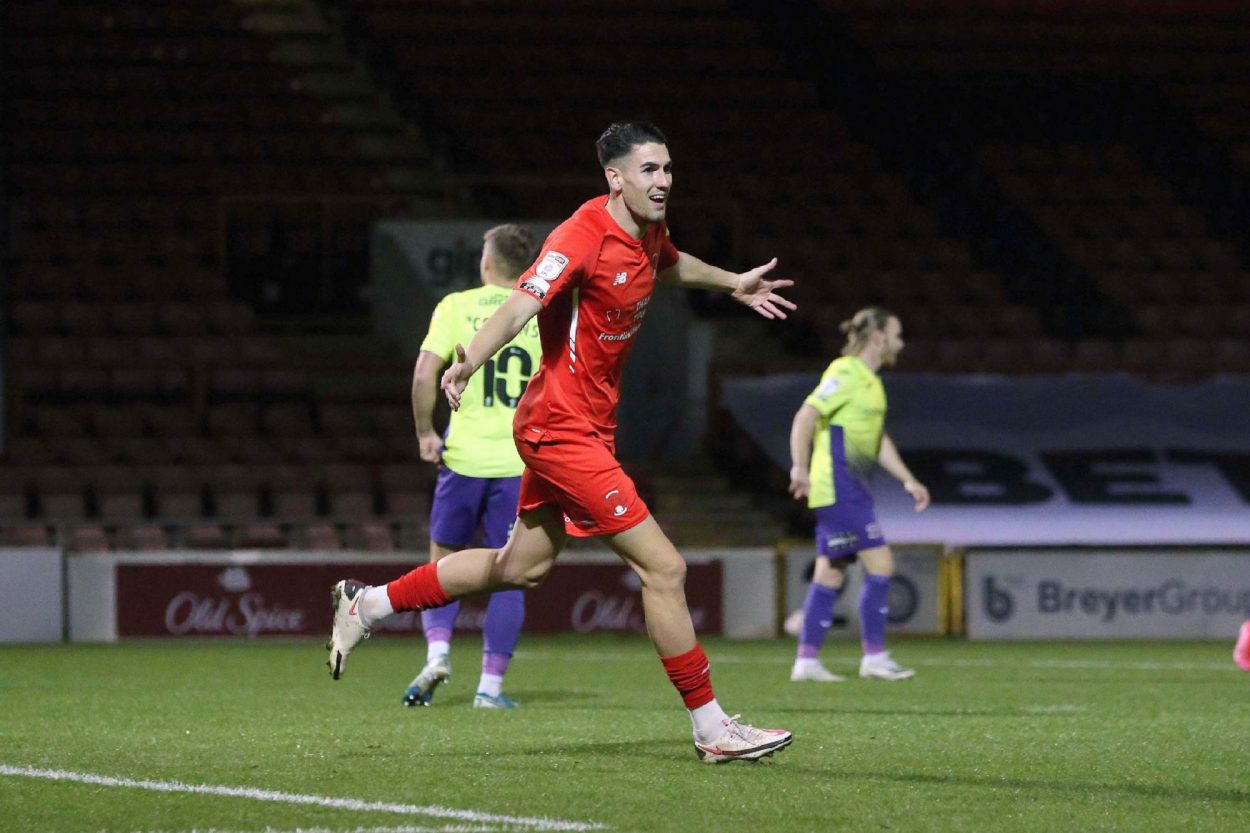 Speaking after last night’s 1-1 draw with Exeter City, vice skipper Josh Coulson suggested that the sliver of disappoint that the players were feeling at having not secured all three points for a third consecutive match was a good sign, an indication of an upturn in form after the home defeat to Grimsby. Certainly, seven points in a week from two away games and a visit by a side that made the play-offs last season, has lost just once so far this time around and who sit sixth in the table, is a decent return. Beyond that though there are increasingly positive signs with the way the O’s are shaping up.

One of the things that has been noticeable over the last three outings has been the relative consistency in the team selection. Whereas in the very early weeks of the campaign Ross seemed to want to rotate the squad on a match by match basis, we seem to have settled on a preferred line-up with the same back four and midfield three for those last three games, and the only real issue to be decided being the preferred options to flank DJ up top, although the injury that Ruel Sotiriou picked up at Stevenage leading to his replacement at half-time may have, temporarily at least, solved that particular conundrum.

Previously it seemed like a choice between Conor Wilkinson and JMD on the right flank, both of whom prefer to cut inside onto their favoured left foot from that position. However, playing the two in the same front line with JMD adopting a more traditional winger’s approach on the left and holding the width, seems to have improved us as an attacking force. Although we do have to hope that DJ can get himself more involved again than he has been in the last two matches.

Commenting before the Exeter game, Orient legend Peter Kitchen suggested: “We’ve played on the front foot and with a bit of authority this past week,” and to this viewer at least our increased proactivity has certainly been noticeable. While Tranmere offered little threat going forward and we know Stevenage are far from being the toughest side we will face this season, the opening period against Exeter after the visitors’ very early pressure, which saw Wilkinson notch his sixth goal of the season after just four minutes was very encouraging from that point of view.

The triangle in midfield with Cissé holding and Jobi and Craig Clay playing further forward looks like our most cohesive unit in the middle of the park. Clay has added key passes to assist goals at Tranmere and last night and seems to have rediscovered his tenacity in the tackle that we haven’t really seen since the National League title winning season. Jobi has rolled back the years with some lively displays after injury and his coaching responsibilities kept him off the pitch for so much of last season, although after playing the majority of the last three matches he did look like a player in need of a rest upon being replaced by Dayts towards the end of last night’s match.

At the back it is easy to point to two clean sheets and only one goal conceded against a good Exeter side as progress, and there does seem a better organisation around the defensive unit. Akinola seems to be growing into his new right back role, the two centre backs are for the most part solid and despite the continuing debate around the deployment of James Brophy at left back he does seem to be the first choice there for now at least. The concerning factor is the individual mistakes that result in us inviting chances, as evidenced by Josh Coulson’s pass straight to Matt Jay that so very nearly led to a second goal for Exeter, need to be eradicated.

In goal we seem to have unearthed a real diamond in Lawrence Vigouroux who combines solid shot-stopping, with calm and assured catching of balls into the box and his distribution is way better than any of us could have expected given some of his early displays after joining the club in January. It is little wonder that he was voted into the EFL Team of the Week after his display at the Lamex Stadium. Last night his drilled diagonal kick to send JMD tearing away down the right which so nearly led to a Louis Dennis goal was something out of the very top drawer that any cultured midfield playmaker would have been proud of.

I realise it cuts against the grain a tad for Orient fans to get too carried away with optimism, but the last three games have been a real tonic after some tough times. In his piece in the Yellow advertiser Peter Kitchen went on to say: “We now have a great opportunity to make ground on the top seven with these successive home games.”, Exeter wasa decent enough point but with the visit of surprisingly low-placed Bolton Wanderers on Saturday followed by a trip to third-placed Forest Green the tests keep coming.

On a different note, while obviously we would prefer to be able to actually attend the matches, Mrs Football Nerd and I have been thoroughly enjoying following each match on Orient TV. With the Premier League’s seemingly never ending greed seeing them continuing  to fleece fans for all they are worth, including the highly controversial Pay Per View charges for games not being screened as part of the already steep subscription charges, it is actually refreshing to able to tune in to listen to Dulcet Dave and co every few days. Yes there may be issues with the audio at times/often, the camera angles and picture may not always be ideal and obviously those of us who watched Stevenage away probably don’t want to hear any more about #orientdogs; but in a way all that serves to keep it familiar and real and keep us connected with our club. Keep up the good work chaps for as long as we aren’t allowed back!