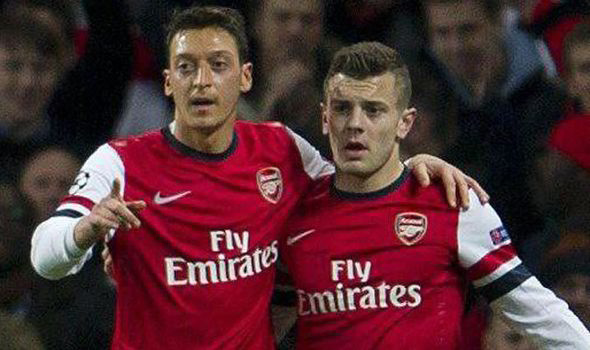 The continued evolution of modern football, in particular the seemingly ever-increasing money that washes around the game, makes it difficult to feel any empathy towards modern day players save for those who go above and beyond our traditional view of them: the mansions, the flashy cars and ‘interesting’ fashion options, and contribute something back to society with their actions. Two that immediately spring to mind as falling into that ilk are: Juan Mata whose Common Goal charitable initiative aims to give back to the communities that raised today’s star players by redistributing a small percentage of their income to charitable causes around the world; the other is of course Marcus Rashford whose sterling efforts to ensure that disadvantaged children are able to access free food during school holiday periods is quite frankly continuing to shame the UK Government for their inaction. Doubtless there are countless others.

Two players, both of whom have played for the club that I follow, Arsenal, probably don’t garner similar support. Mesut Özil and Jack Wilshere are certainly two of the most naturally talented footballers that I have ever had the pleasure to witness play the game, yet at the ages of 32 and 28 respectively, instead of being at the forefront of Arsenal’s hoped-for return to the very top of the game, the pair find themselves in footballing limbo, which hasn’t entirely been of their own making.

Özil has been left out of Arsenal’s Premier League and Europa League squads meaning despite the infamous £350,000 a week the club continue to pay him, he won’t be able to contribute on the pitch in any way until January at least, in all likelihood at all over the course of his final season with the club. Wilshere’s contract with West Ham was terminated by mutual consent on Transfer Deadline Day as in the words of the player himself he couldn’t face the prospect of a year on the sidelines with no hope of playing. Both situations beg the question of how it came to this?

While he had made a splash in the Bundesliga first with Schalke 04 and then after moving to Werder Bremen, it was at the World Cup in South Africa in 2010 that Özil first burst onto the world scene, as the key playmaker in an exciting, reinvented Germany side that so very nearly went all the way. The mercurial Number 10 was very much the creative spark in that side, so much so that none other than Miroslav Klose remarked of him “We are looking at the future World Player of the Year”.

Özil’s performances in driving Germany to the semi-finals of that tournament, where they were ultimately eliminated by Spain, led the self-avowed ‘Special One’ himselfJosé Mourinho to come calling, seeing the mercurial playmaker’s uncanny ability to spot passes that no other player could as a means of assisting goals at a amazingly regular rate. During his time at Real Madrid Özil racked up a total of 80 assists, 25 in his first season alone the highest of any player in any of the major European competitions, and played a key role in Los Blancos regaining the La Liga title from Pep Guardiola’s all-conquering Barcelona side in 2011-12.

However, despite this attacking contribution, augmented by a total of 27 goals, there were murmurings about the club hierarchy not being happy with his work rate or attitude (sound familiar?) with Özil revealing in his biography that Mourinho called him a “coward” and “a baby” and said of him: “You think two beautiful passes are enough… you think you’re so good that 50 per cent is enough.” As so often happens at the soap opera that is the Bernabéu that was the beginning of the end for the player who had also been criticised by the all-powerful president Florentino Perez who labelled him “unprofessional”.  Enter Arsène Wenger and Arsenal who, having just had the shackles of the Emirates Stadium build debt eased, spotted the opportunity to make a statement signing for the first time in many years, Wenger confident in the knowledge that his person-centred approach could coax the best out of Özil.

I remember the day that Özil’s signing was announced, it was Transfer Deadline Day 2013, the day after we had beaten Tottenham 1-0 in the North London Derby, and there was a genuine feeling of excitement and anticipation amongst the Gooner faithful at having signed a bona fide world class talent, made all the sweeter by the fact that the transfer had been facilitated in no small part by Real Madrid’s swoop for Spurs’ star Gareth Bale.

While there were flashes of Özil’s genius during the first seasons at Arsenal, there was also a feeling of being underwhelmed, that the player wasn’t showing all that he was capable of. His languid body language and very apparent lack of work rate led more and more people to wonder if he was actually the real deal, or simply a player capable of sublime pieces of skill but lacking the attitude and application that could transform the Gunners into genuine contenders and establish himself amongst luminaries of the Premier League, European and World football. In an infamous quote, journalist and at-the-time host of Sky Sports’ Sunday Supplement, Neil Ashton, accused Özil of “nicking a living”.

During the continued decline of the later Wenger years and through the tactically-muddled tenure of Unai Emery, Özil progressed from being indulged, to being left out of the tougher away games, to eventually becoming more and more peripheral and eventually left out of the side all together despite signing that oh-so-controversial new contract in January 2018. There was a brief attempt to reengage Özil by new boss Mikel Arteta in his first ten games in charge, but since then he has fallen out of favour again and has not featured at all since the restart in June.

Quite where Özil goes from here is anyone’s guess, there have been rumours of interest from the Middle East, China, Turkey and, one presumes, the MLS but the fact that he is willing to continue to pocket his cash, or as he puts it to “keep fighting” for a place rather than seek a new challenge, once again calls into question his motivation.

Back in 2009 when he was awarded his first professional contract with Arsenal, it seemed as if Jack Wilshere had the world at his feet. There is nothing like a homegrown player with clear talent and quality to get a fanbase excited. Our first glimpses of Wilshere in action were tantalising to say the very least. Here was a genuinely precocious talent with an obvious football brain, a great passing range, an uncanny ability to progress the ball forward from midfield with close control and excellent dribbling ability, and a tenacity in the tackle that belied his relatively small physical stature. Sadly, those latter two attributes were to prove his undoing and prevent him becoming the talent we all hoped he would. No less a judge than Steven Gerrard said of Jack at the outset of his career that he was “so good” that he would not only win 100 England caps but also become England captain.

After a spell on loan at Bolton in 2010, it was the 2010/11 campaign that was to prove Wilshere’s breakout year. He played a total of 49 games that season, starting 44 of them, proving a key part of the Gunners’ midfield pivot alongside the developing Alex Song and just behind another supremely talented player who broke through in his teens, Cesc Fabregas. Wilshere’s match mirabilis was the 2-1 win over that brilliant Barcelona team in February 2011. So good was Wilshere in that match, standing up to that stellar midfield of Busquets, Iniesta and Xavi that the latter reflected: “With all respect, he doesn’t play the English way. If he can overcome injuries, he can go on and be one of the best midfield players in the world.” Then it all went wrong.

Wilshere picked up an ankle injury in the Emirates Cup pre-season tournament at the start of 2011/12 which turned out to be a stress fracture in need of surgery, he played no part in the 2011/12 season proper. A set back in his rehabilitation meaning that he didn’t feature again until October 2012.

After playing relatively consistently through 2012/13 and 2013/14, Wilshere was injured again in March 2014 whilst playing for England against Denmark at Wembley and didn’t play again until a cameo substitute appearance at Carrow Road in the final game of the season.

An injury to his other ankle against Manchester United in November 2014 and then a broken fibula in pre-season training limited Wilshere to just ten appearances across the next two seasons. At the start of the 2016/17 season Arsenal brought in Switzerland international Granit Xhaka, presumably rationalising that they couldn’t trust Wilshere to stay fit, a move that meant there was no place for the now 24-year old in Wenger’s plans for the season and he was loaned to Bournemouth where he played on a regular basis up until April when he fractured his fibula again in a clash with Spurs’ Harry Kane.

Wilshere returned to Arsenal and was available for the entire 2017/18 campaign, Arsène Wenger’s final one, but featured only 12 times. When Wenger moved on, the new Head Coach Unai Emery saw no place for Wilshere, and he was sold to his boyhood favourites West Ham. He has played just 19 times for the Hammers and hasn’t started a Premier League match since August 2019 culminating in his decision to terminate his contract last week. Tragically Wilshere has been training in a local park in order to keep himself fit while he tries to find a new club.

Two very sad if different stories that go to show how much attitude, commitment and good fortune play in the fate of top-level footballers, no matter how much talent they possess.