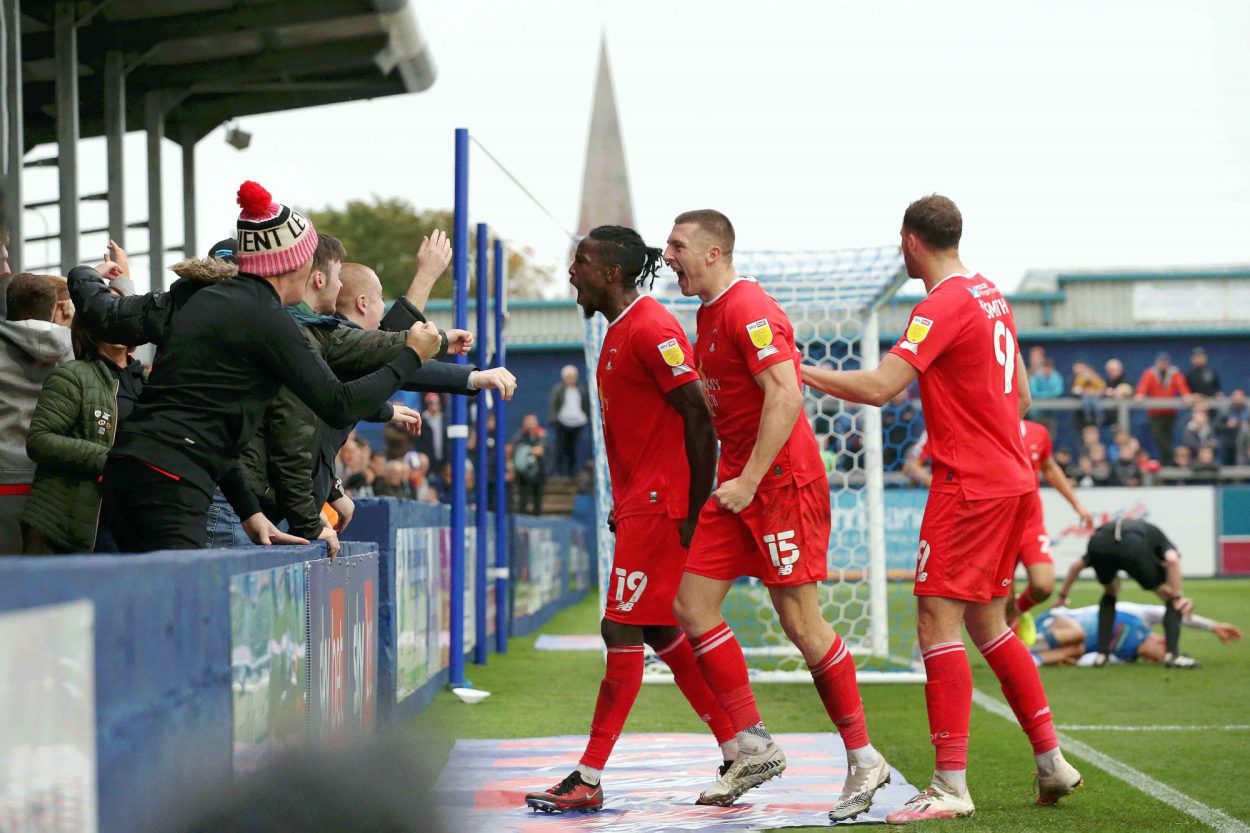 After a positive and encouraging start to the season which saw KJ’s newly assembled squad pick up 15 points out of a possible 24, losing just once at home to surprise package Harrogate Town, the good ship Orient seems to have happened upon some choppier waters in recent weeks. The goalless draw at home to Mansfield was frustrating, the added time loss at Port Vale tough to take, but the draw away at Barrow will hopefully have steadied the ship at least to an extent.

Although when the Bluebirds went ahead early in the second half, I suspect I wasn’t alone amongst the Orient faithful in fearing the worst. Thankfully Big Omar Beckles was on hand again to equalise with his third league goal of the campaign and to help us to another away draw. Don’t they always feel better when we come from behind?

Mrs Football Nerd and I were off on our travels for the second week in a row and our second visit to Cumbria in our six awaydays so far. We ummed and aahed about whether to stay over but in the end we decided on another full day adventure, even though it makes for a long day there is something particularly special about getting there, watching the match and getting back in the same day.

After having started on the beers just before half 10 the previous week on the way to Port Vale, we decided that we were going to be good/sensible (not something that comes especially easy or naturally to us!) and not allow ourselves any beer until our arrival in Barrow, scheduled for 12 noon. So it was that anyone lurking around Euston at 8am that morning would have likely seen the highly unusual sight of us holding coffees rather than the usual carrier bags of beer, butties and crisps.

As Barrow-in-Furness, to give it its full title, is located in the south western corner of Cumbria you have to change trains at Lancaster when coming from the south and then catch a local train through to Barrow. The second stage of the journey, in particular, is very picturesque as it takes you along the bottom edge of the Lake District itself and some beautiful scenery.

It takes just under an hour to get from Lancaster to Barrow, upon our arrival we set about finding our bearings, which didn’t take long. Holker Street is a 15-minute stroll up the road after which it is named, but more importantly given our restraint on the journey up, the rather excellent Duke of Edinburgh hotel is a mere two pedestrian crossings away from the station and has an award-winning pub attached to it, serving the fantastic Lancaster Brewing Co. ales.

By the time we had polished off a couple of Lancaster Blondes each (there has to be a joke in there somewhere!), the pub had filled up with quite a few more Orient fans who had taken the later train or driven up, as well as some locals, but the atmosphere was very friendly.

As it was harder to get served at the bar with more people in, we decided this was the opportune time to make our way up to the ground. It had been drizzly ever since we arrived, (what did we expect this is the very definition of North Western England’s climate?), but the stroll wasn’t unpleasant, and we arrived in plenty of time for the pie and pint deal, which at £6 each was a bargain.

With Barrow having only been promoted back to the Football League in 2020, the ground has a kind of non-league feel to it, very reminiscent of some of the places we visited in the National League days. One of the recent “improvements” was the installation of a roof over the Holker Street end which houses both home and away fans due to a prefab concrete block containing the club’s offices and a bar behind the other goal. Despite it being a recent addition, the roof has several annoyingly positioned supporting pillars and the view from the away terrace (tucked next to the weirdest and narrowest stand I have ever seen for away fans!) is further obstructed by a Perspex screen, presumably to protect us from the local youth wannabe hoodlums who seemed to be out in force on the home side of the barrier.

After those recent disappointing results, it felt that despite the home side being only a point behind us and on the back of two straight wins, this would be an ideal time for us to bounce back. The only changes to the starting line-up from Port Vale last week were the return of Alex Mitchell, who it seems has in quick time established himself as a first choice at the back, to replace Dan Happe and Craig Clay being asked to fill in at right wing back for the now-definitely-suspended Tom James.

The early pressure came from Barrow which with us being so close to the goal they were attacking made me feel even more jumpy every time the ball came into the box given our proximity to the action. It always feels worse when it is right in front of you.

Thankfully we survived the early skirmishes in our goalmouth, but a couple of blocked shots was all we seemed to be able to muster in response. As the half wore on Barrow forward Josh Gordon seemed to conclude that the best way of fashioning an opening was to throw himself to the ground every time an Orient player came near, whether there was any contact on him seemed to be a trivial consideration. The travelling faithful made it abundantly clear what we felt about his antics. Right at the end of the half Archie’s stinging drive from a Harry Smith flick-on forced an excellent save from Farman in their goal but it finished goalless at the break.

Just 3 minutes into the second half Gotts broke through their inside right channel latching onto a cute through-ball and rifled it past Vigs to give the home side the lead. Conceding a goal away from home is always tough to take, especially as you watch the other 3 sides of the ground celebrate, but the fact that it was so early at least gave us hope that we might get back into it.

KJ’s response was immediate sending on Ruel, fresh from his two goals against Crawley the previous Tuesday, for Aaron Drinan. From there whether they eased off or we stepped up our game is questionable, but we seemed to seize the impetus. Archie was very nearly played in by Ruel and then moments later tested Farman with another powerful effort. However, when Brough rattled our crossbar after a quick counter it was a warning to keep the backdoor closed unlike we had done at Port Vale.

Then with just over 20 minutes to go we won a corner out on the left, Archie flighted it in, Sotiriou nodded it goalwards where Omar was there to stretch out a long leg and poke it home. The celebrations were as much in relief as joy. Both teams had a chance to win it late on but in the end another away draw felt like a fair result.

On the face of it that was a point salvaged and in a small way restored some momentum, it is however now 3 games without a win and just 2 points gained from the last 9. Thanks to our start we still sit in sixth place in the table and are only 6 points off the top. For me though the nagging worry is that the goals from our attacking trident seem to have dried up since Bristol Rovers away. With 19th placed Walsall at Brisbane Road on Saturday followed by league leaders Forest Green on Tuesday evening, now would be the perfect time for them to find their shooting boots again. If not, are freshly returned from injury Paul Smyth or the growing in confidence Ruel ready to pick up the slack?